DAX Conversation: when does innovation fail? 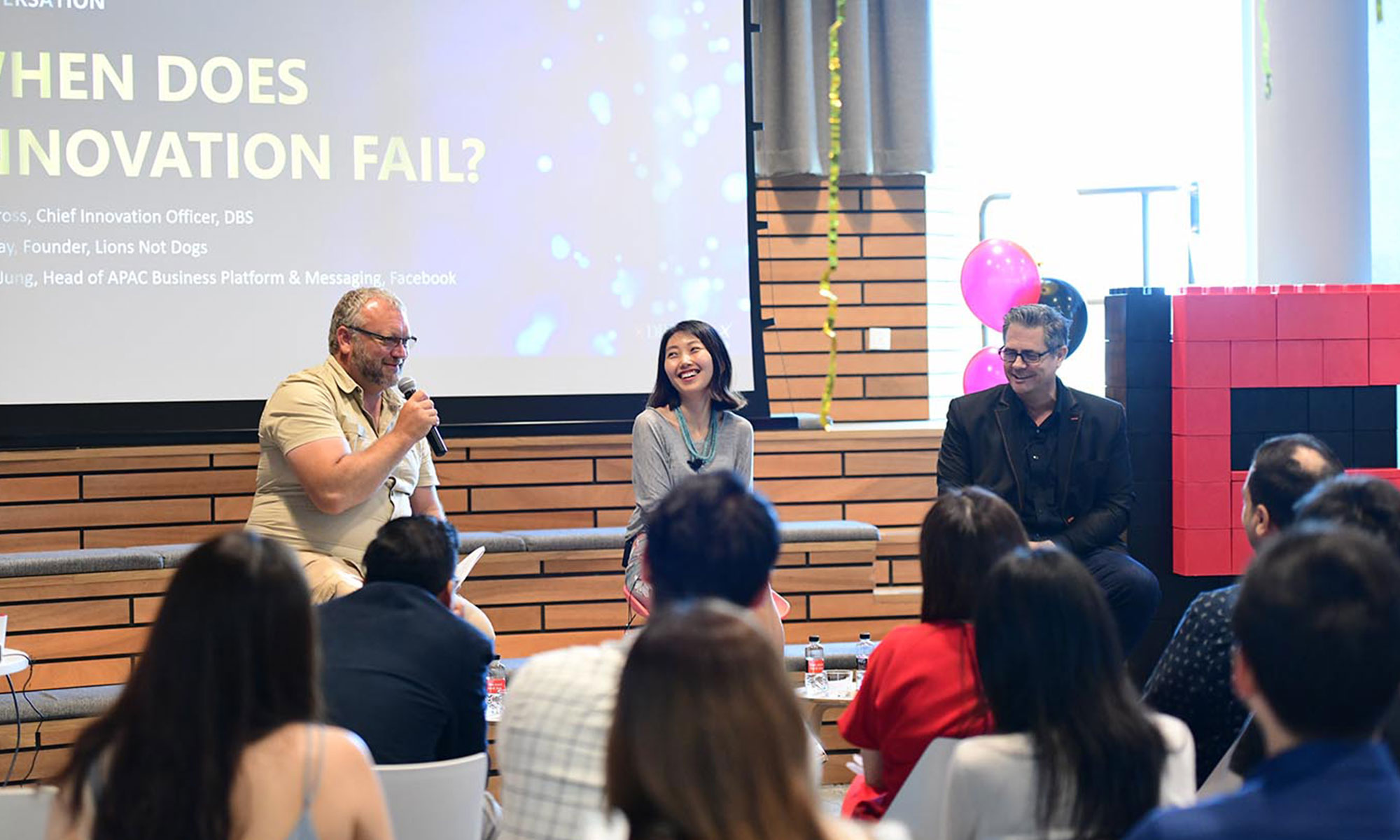 Can innovation be taught?

From common misconceptions to measuring innovation, experts from Facebook and consultancy Lions Not Dogs share their views in a panel discussion at DBS Asia X

Innovation is often regarded as one of the most overused and abused corporate jargons. How would you describe innovation?

Jung: I’d define innovation as something that created a certain degree of positive change. The difference between a start-up and a person who thought of the same idea is that the start-up acted on the idea.

Gray: We need to establish what is defined as innovation, invention and continuous innovation – and where they fit in the innovation continuum. Often, when people talk about innovation, they mean speed to market. They have confuse corporate agility with innovation. Innovation is doing good things but ultimately doing them faster.

I like your point earlier that innovation is not just an idea or a thought. It is something that must be delivered. So, what would you say is a big misconception about innovation?

Jung: When I hear the word innovation, I find myself thinking it is something fancy, something big or involves the use of new technology. But when I look at my own experience at Facebook, I start to think a lot more about the process of building.

Often, innovation starts from a small moment. It does not have to be fancy, and often doesn’t involve new technology.

During a Jakarta business trip to showcase the different tools Facebook has to help our partners reach their customers, this guy told me he didn’t think he would have a chance to own a credit card in this lifetime. It broke my heart.

This conversation brought new business insights to Facebook and we saw the opportunity to create a solution that would enable him to pay for his advertising without a credit card. Did we use new technology to build it? No. Did it seem super fancy? No. Was there innovation? Yes. It was absolutely innovation for his business because he found a new way to reach his customers on our platform and this allowed him to scale his business.

Gray: I keep hearing about innovation being spoken about as a “thing”. To me, innovation is a mindset that should be emulated from senior leadership throughout the organisation. There are tools that can be used when you have that mindset, but actual innovation only happens when it delivers an outcome. The outcome could fail but it’ll come to the point where you decide whether to kill, pivot or persevere with the idea.

Innovation is not just about centralising group innovation; it is about having a team of specialists to transmit and build the capability from within the organisation rather than grab hold of the “innovation” title.

Read more: DAX Conversation: why innovation is like a rainforest

What creates a positive environment that encourages innovation?

Jung: At Facebook, we have an active feedback loop in the product cycle. We come up with the idea, determine the opportunity and start developing a prototype. If we were to fail, it is a practice to back track, determine what went wrong and iterate from there.

If you look at this cycle, it has to encourage a positive feedback loop. If all you get is blame when an experiment or idea fails, you probably won’t even want to try it. That is a very important part of the culture in an organisation.

Gray: The culture of failure is exceptionally essential to being successful. I’ve heard a lot of companies talk about failing fast but I’m seeing very few truly adopt it. I once wrote a blog post for a CIO and used the phrase “failing fast”. This resulted in a serious conversation where he dwelt on the point that “we never fail, we are supposed to get it right 100% of the time”.

This culture of experimentation must permeate from top to bottom to be successful. Failing fast doesn’t mean to go off to doing something interesting. It has to have substance behind it.

That culture of failure, thinking of experimentation and notion of giving people space – meaning time – to try things is what successful innovation looks like.

The measurement of innovation is a tricky thing. You can measure revenue but you cannot begin to compare and measure the uplift achieved when you launch a product with and without innovation. What’s your view?

Gray: One of the things I do is to sit within innovation teams to question the intention of a particular product or a new function or feature they want to roll out. Is it purely discovery and experimentation? Was it created with the intention to bring something to market?

The biggest challenge is, at the end of the day, it needs to lead to the development of “live” products. It’s fine to do things in a lab environment but you need to understand the needs of customers.

The key to innovation is making that leap from lab to scale. And that is the part a lot of organisations struggle with.

Jung: You need to make change and determine the right measurement for that. What we measure often are inputs – how much you invest in an R&D centre or how many ideas came through this hackathon – because it’s easier. But often, we don’t have the same measurement tool for output, so how do you know what innovation happened? It’s all related but we need to make a significant improvement in how we measure output.

Gray: A good measurement is the number of things we kill. I used to crack open a bottle of champagne every time we killed an innovation because we just saved another 5 to 6 million dollars. But, when you kill something, never throw anything out. I can’t count the number of times we killed something and four months later, another opportunity came and I realised I’ve seen that before somewhere. That’s where you get the previous project and research out.

Jung: Innovation is not always something that one or two teams or department can drive. That’s why culture is such an important thing. When an organisation sets up some functions like that, it’s really important that it has a long-term purpose to deliver something, with clear milestones in the short term.

Gray: First, you need to be very wary of anyone who comes to you with a solution. That’s not where innovation starts. The saying “there’s no such thing as a bad idea” is absolute nonsense. I’ve seen thousands of crap ideas.

Always make sure you’re starting at the right place: what problem are you trying to solve? And make sure you don’t fall into the trap of starting with the solution.

Second, you must have a thick skin to do the kind of innovation we’re talking about, it’s going to make you a target, one way or another. Lastly, innovation is not purely about technology. Today, people need to be bilingual – someone who can talk business and understand tech – they are gradually one and the same.

DAX Conversation is a series of thought leadership interviews to capture insights from experts in different fields, and to generate new perspectives on the impact that innovation brings to their organisations and the larger community.