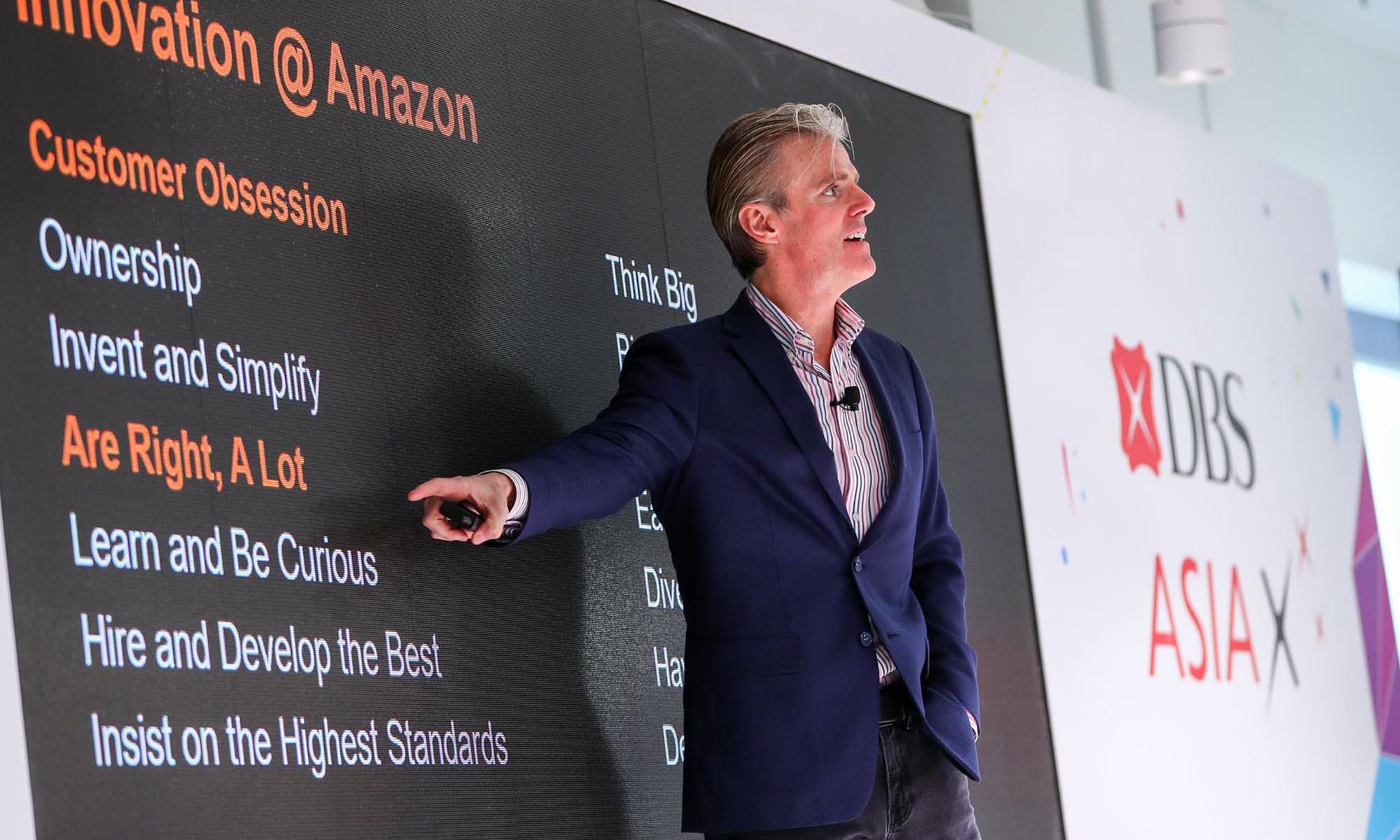 Speaking to DBS employees and others from the innovation community, he highlighted three key principles – from among the 14 leadership principles Amazon believes in – that the company sees as key to innovation. He also underlined some practical steps that companies can take to kick start their innovation journey.

Teams at Amazon start by envisioning a product or service they want to deliver and write the press release (with FAQ) they want to issue. It’s written in the customer’s language – focused on the customer benefit – which helps teams think about how to offer new products and services to customers.

Teams have also “done things as trite as putting empty chairs at tables” during meetings, says Misener. “If customer is in that chair and we’re not embarrassed by the meeting, then we know we’re on right track.”

The implication is that it’s okay to be wrong in the context of innovation, says Misener. Innovation requires experimentation, and that includes the possibility of failure. Amazon will “continue to make big bets” and “we’ll continue to fail at many of them”, he says, “but why this works if you do this continuously is because the few that succeed will pay for a lot of failures”.

There have been many internal failures at Amazon – and a couple of public ones, he acknowledges. For instance, the company had an auction site that came under heavy criticism. The site was transformed into zShops, which was similar but had fixed price items. That failed too. The next iteration, Marketplace, allowed third-party sellers to list their products and prices on the product detail pages, alongside items carried by Amazon. That finally turned out to be a hit, resulting in sales via third-party sellers making up more than half the sales on Amazon’s website.

You have to be operationally excellent, says Misener. Do what you say you are going to do.

Amazon Web Services (AWS) was born out of the desire to deliver results not only externally for customers, but also internally within the company.

Teams working on different projects were often re-inventing the wheel, re-creating technological infrastructure that was already used in other areas of business. As such, in 2006, Amazon launched AWS, which offers a fully featured technology infrastructure platform in the cloud, comprising of a broad set of compute, storage, database, analytics, application, and deployment services.

With this platform on which new products and services could be built, teams could then focus on their ideas.

AWS is now used by companies across the world. DBS Bank, in 2016, signed an agreement with AWS to leverage its cloud technology and a year later, further collaborated with AWS to train employees in cloud engineering skills.

Misener listed six to-dos that companies can get started on.

Beyond four walls: what DBS Asia X means for us and the innovation community