More eateries in S'pore are putting local produce on their menus 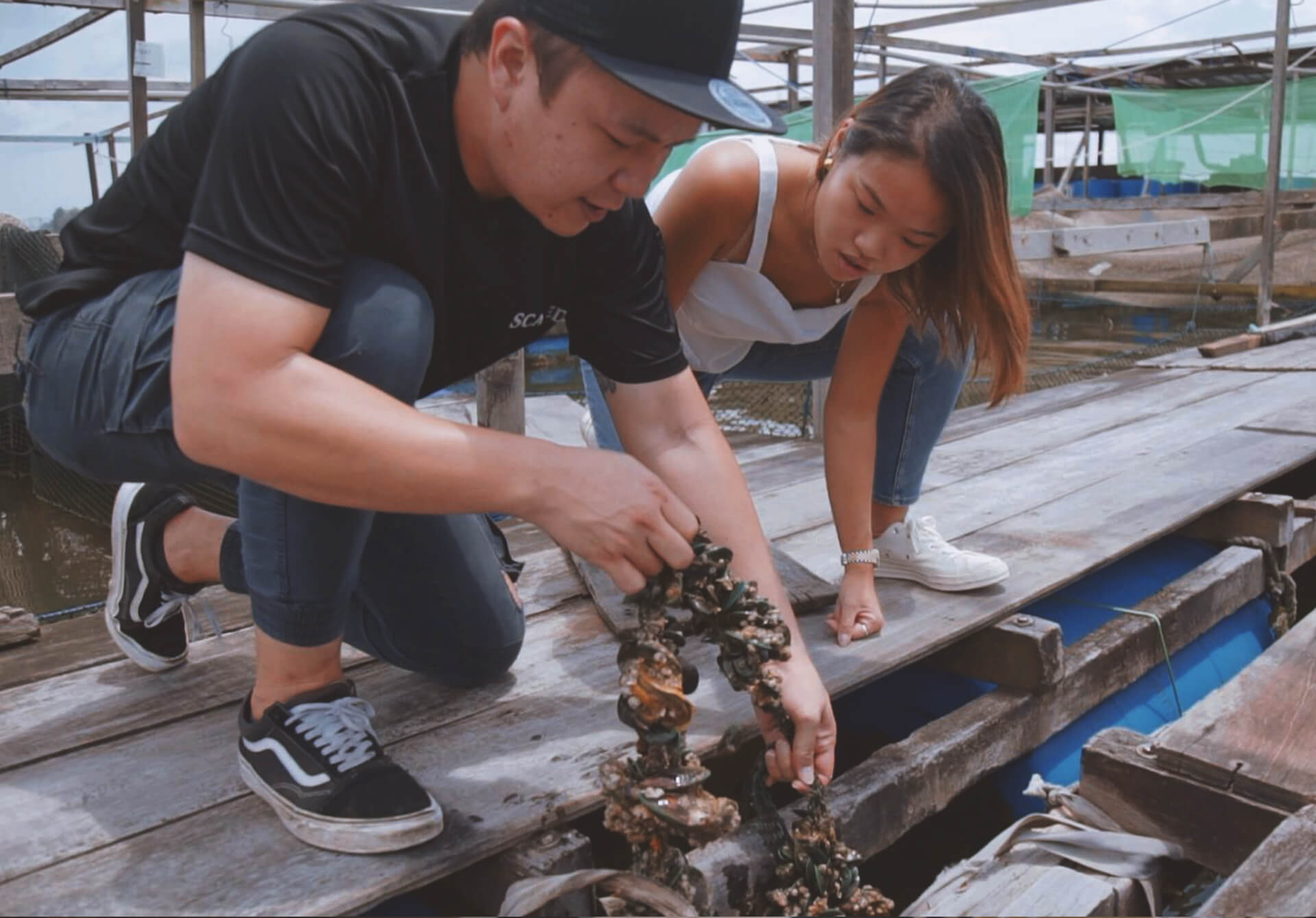 Ah Hua Kelong has a floating fish farm off Pulau Ubin and a kelong off Sembawang. ST PHOTO: SAMUEL RUBY

Just a decade ago, restaurants devoted to using local produce were practically unheard of. Today, a plethora of locavore establishments have popped up, including the fine-dining Restaurant Labyrinth at the Esplanade that was awarded a Michelin star.

Even non-locavore eateries often use ingredients sourced from local farms and prominently feature these on their menus.

Fuelling this change are a number of factors. Topmost is the desire to support Singapore's farms and food producers. There is also a growing consciousness of the importance of reducing the carbon footprint of food supply and the wish to support sustainability.

Chef-owner Han Li Guang of Labyrinth says the importance of supporting local farmers was brought home when supply chains were disrupted by the Covid-19 pandemic.

The Government has also has set a "30 by 30" goal for Singapore to produce at least 30 per cent of the country's nutritional needs locally by 2030 to reduce its reliance on food imports. The figure now stands at less than 10 per cent.

At Labyrinth, about 60 per cent of the ingredients used are sourced locally, including all its seafood such as green-lipped mussels, flower crabs, garoupa, yellowtail, snapper and prawns, and herbs such as ulam raja and Indian borage, and quail. Every dish on the menu showcases local produce in a way, says Han.

He believes a lower carbon footprint is important for the environment. So what he cannot get locally, he tries to source regionally.

He says: "When they talk about 'local' in the Americas or Australia, it's a whole continent, but Singapore is tiny. So, we have to get some things such as chicken from Johor, which comes in fresh every morning across the Causeway over land, which has a lower carbon footprint than flying something in on a plane.

"Sustainability is not just about how food is farmed, but also how it's transported, whether it comes on a jet plane, a big ship, a small boat or a lorry."

The Western restaurant opened in 2015 with the aim of supporting the local urban farming movement and celebrating local farmers. It is working towards being one of the "most sustainable" operations in South-east Asia, says its head chef Oliver Truesdale Jutras.

It works closely with Edible Garden City, which runs more than 50 urban food gardens around Singapore, to supply its kitchen with fresh herbs and vegetables.

Edible Garden City was given a grant by DBS Foundation in 2017 to ramp up productivity and expand its product range.

Since then, DBS has also partnered with it to build small urban farms at two of the bank's offices where employees get to try their hand at gardening. Bank staff also volunteer at its various farms and lend their business skills to help it scale up its work and impact.

Chef Jutras says OFC incorporates all of the harvest from its farm, run by Edible Garden City, into its menu, as well as those of sister restaurants such as Drunken Farmer and The Butcher's Wife. The crop harvested each week include lettuce, pumpkin, eggplants, lady's fingers, leafy vegetables, corn, cucumbers, tomatoes, papayas, pineapple, edible flowers and herbs.

About 25 per cent of the plant ingredients used at OFC comes from the farm and it is working towards increasing that to 35 per cent.

The rest comes from other local and regional farms. Chef Jutras says: "Our definition of local is Singapore first, South-east Asia second. At least in the case of vegetables, we rarely go outside this zone. This is part of our ongoing commitment to support local farming and an effort to reduce carbon footprint."

He adds: "We also follow a path of less harm for ingredients from elsewhere. If there is a gap in local supply or something that simply isn't available locally, it doesn't mean we just buy it from anyone. We might search for a local alternative or buy from Ugly Food."

Ugly Food is a Singapore enterprise that salvages excess and "ugly" fruit and vegetables from local farms, that is usually overlooked by consumers and used to be discarded, to reduce food waste.

Ah Hua Kelong, which has a floating fish farm off Pulau Ubin and a kelong off Sembawang, supplies seafood such as pearl garoupa, seabass, snapper, pomfret, lobster and wild-caught mussels, clams and flower crab to restaurants.

Partner Wong Jingkai also forayed into opening a restaurant, Scaled by Ah Hua Kelong, in 2017 to showcase its produce. Ninety per cent of the seafood on the menu comes from its farms, while the bulk of the rest, including vegetables, comes from other local producers.

Imported seafood is rarely used, though there are exceptions such as saba, a kind of mackerel not found in local waters.

Chef Han of Labyrinth says sourcing nearer afield helps ensure freshness. "When it comes to herbs, vegetables and seafood, the time it is harvested to when it reaches the kitchen and table matters in terms of freshness and flavours."

Even large restaurant chains like the TungLok Group, which operates a fleet of more than 10 Chinese restaurants, gets about 20 per cent of its ingredients from local suppliers and sources. These include barramundi and fish maw from homegrown Kuhlbarra, jade perch from Blue Ocean Aqua Technology and sea bass from Aquaculture Centre of Excellence.

TungLok's president and chief executive Andrew Tjioe says: "In the past, there was not a lot of variety available locally. Hence we had to source outside Singapore. However, in recent years, the variety of local produce has gradually increased with companies venturing into agriculture.

"The quality of local produce can be comparable with that overseas - though not all. We put in place an extensive screening process to verify the authenticity and quality of the produce. This include exploring the techniques used, as well as how socially responsible, environmentally friendly and sustainable their practices are. Where possible, we also organise visits to these farms to understand how the produce is grown."

He stresses that his group gives local suppliers priority when it sources for ingredients. This is despite the fact that local produce often costs more than imports - mainly because of the small scale of farming here.

Mr Tjioe says: "For products like fish, local ones tend to cost about 20 per cent more because of lower economies of scale. Also, many local suppliers invest in practices which are sustainable and environmentally responsible, which comes with a higher cost."

Mr Leon Tan, co-owner of Laut, a seafood-centric restaurant in Stanley Street that supports local and regional farms, chimes in that besides smaller land plots, local producers also have to contend with high rent and capital costs.

"For example, locally farmed pandan leaves cost almost twice of those from Malaysia," he says.

But he feels the "artisanal value" of small-batch production makes it "worth paying for".

About 45 per cent of his ingredients come from local farms. These include seafood from BluCurrent, Ah Hua Kelong and SeaFarmers @ Ubin, frogs from Jurong Frog Farm, herbs and flowers from Edible Garden City and rice vinegar from W Rice Wine.

Chef Jutras says: "My perspective has always been that if you don't support operations in order for them to achieve economies of scale, you can't really complain about their pricing. I believe it's more important to support local farms than to squeeze 30 cents more out of a dish."

A sea change, too, is happening with diner attitudes towards local produce.

Mr Tan from Laut says: " I believe local consumers used to be biased against local produce because of the notion that pricey, more exotic imported produce is better. However, we have been able to convert some customers who were surprised at the good quality of the local produce. They also applauded our efforts to be as locally sustainable as possible."

"It's about building relationships," he reflects. "I believe that working with these farmers who put in their heart and soul, and sharing their knowledge, helps me learn how to use their produce in the kitchen. It makes me a better chef."

Tips on lowering your carbon foodprint:

1. Now trending at upmarket restaurants - listing the source of ingredients on the menu.

How do you identify dishes using produce from Singapore farms? Look out for home-grown names such as Edible Farm City and Sustenir for vegetables and Kuhlbarra, BluCurrent, Ah Hua Kelong and SeaFarmers @ Ubin for seafood.

2. If you are looking for local produce to cook, organic vegetables from farms like ComCrop are sold at supermarkets such as FairPrice and Cold Storage, as well as online.

Many farms also have their own websites to retail their produce. These include Edible Garden City and Quan Fa Organic Farm for vegetables, and Kuhlbarra and Ah Hua Kelong, which delivers seafood to your doorstep the day it is harvested.

This series presented by DBS and The Sunday Times explores the environmental impact of everyday food choices, and how consumers can live more sustainably when it comes to what they eat, and how much they leave behind.