hello
Unsold but not unwanted food: what do supermarkets in Singapore do with these?

BY VANESSA LIU AND JUDITH TAN, FIRST PUBLISHED IN THE STRAITS TIMES, 14 DEC 2020 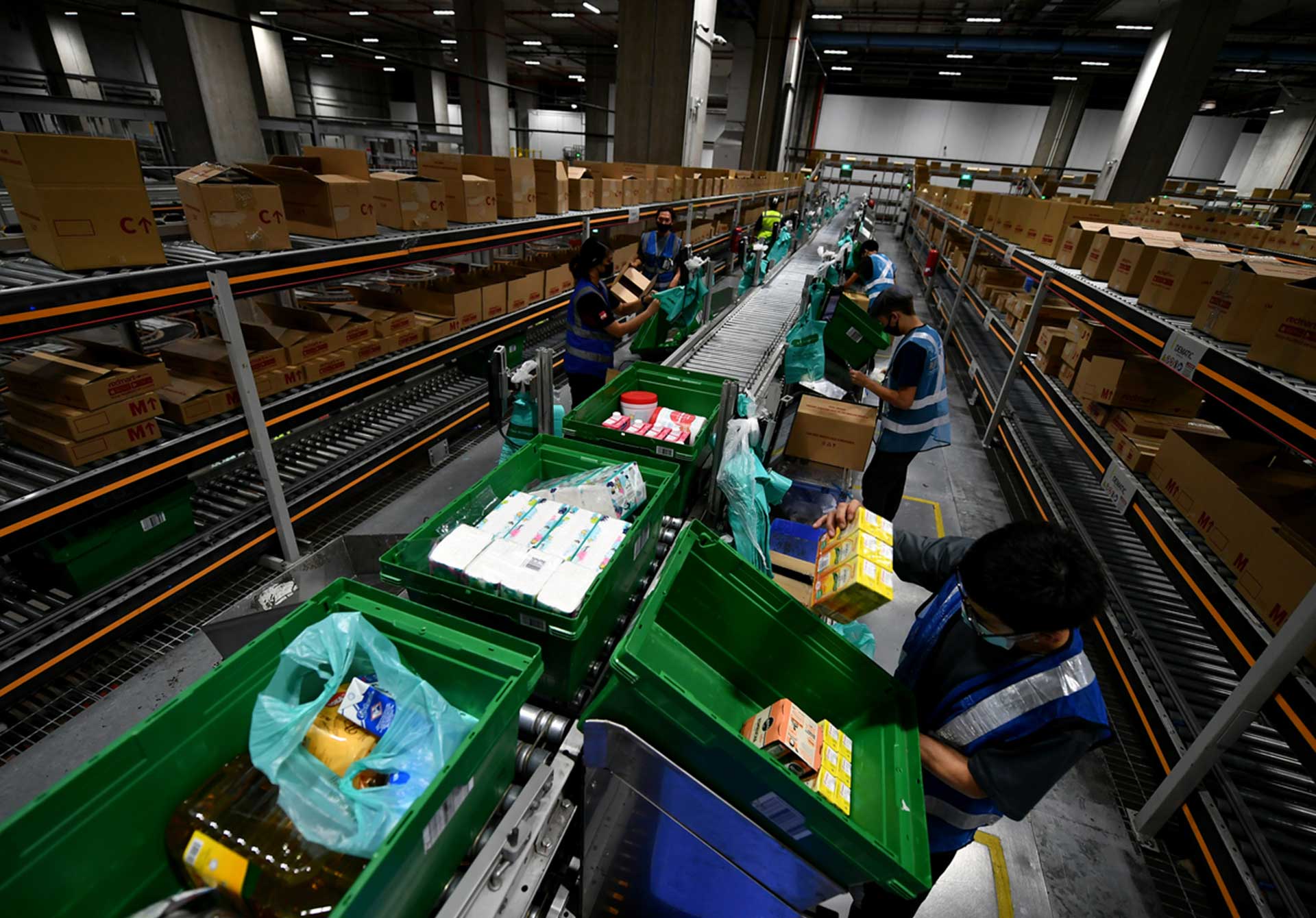 Close to 1.3 billion tonnes of food is wasted every year, even as more than 800 million people worldwide go to bed hungry every night. In this fourth instalment of a six-part series on food waste, The Sunday Times, in partnership with DBS Bank, takes a close look at supermarkets, which have been singled out as a major culprit globally for throwing out perfectly edible food

Crushed cereal boxes, dented tuna cans and torn labels. These are things you rarely see on supermarket shelves in Singapore, and it is not by chance. Items deemed not good enough to sell are sieved out by supermarkets during the quality control process.

In the past, most of these items would have ended up in the trash. But as the issue of waste gains traction among the buying public, things are slowly changing.

Since 2015, supermarket chain FairPrice has been working with food charity Food from the Heart (FFTH) to redirect items from its 140-odd outlets to families and individuals who need them.

FFTH chief executive Sim Bee Hia told The Sunday Times that about $18,000 to $24,000 worth of food, including staples and canned food, is given away every month to its partners via this programme.

Food items with damaged packaging are not the only things that supermarkets ditch.

Tonnes of produce are thrown out because of poor inventory management such as over-ordering, or because of cosmetic filtering, where produce that is edible but blemished or of the wrong size is rejected.

Supermarkets have long been fingered as a major culprit of food waste. In 2016, France made headlines by becoming the first country to ban supermarkets from throwing away unsold food. A law was introduced to force these businesses to donate the food to charities or food banks.

The Sunday Times understands that at a central warehouse of a supermarket chain here, about 15 to 20 pallets of produce are rejected every day. Each pallet can contain anywhere between 500kg and one tonne of produce. The produce might be rejected because it does not meet standards set by the supermarkets. For instance, some supermarkets accept bananas from suppliers only when they are totally green, without a tinge of yellow, so that they can ripen on the shelves.

"Food waste is a pertinent issue that requires sustained and concerted efforts from industry players, government agencies and the community."

The other major chains, Sheng Siong and Dairy Farm Group, the latter of which runs the Cold Storage and Giant supermarket stores, declined to say how much food waste they generate every year.

The spokesman added that from 2024, owners and occupiers of shopping malls, including supermarkets, that generate large amounts of food waste will have to segregate it for treatment. He said NEA will engage these stakeholders to get them to incorporate workflows that segregate food waste in their business operations and to adopt food waste recycling initiatives.

"One of the challenges supermarkets face is the market demand for and treatment of produce that may have some blemishes or do not look aesthetically pleasing.

"This is where consumers can also contribute to the food waste reduction efforts. It starts with an understanding and acceptance that odd-looking or even blemished fruits and vegetables can be trimmed and are still edible."

Compared with conventional markets, RedMart does not “need to stock up shelves across dozens of stores with fresh produce, of which not everything is sold”, says head of grocery Richard Ruddy. ST PHOTO: LIM YAOHUI

A spokesman for Sheng Siong said it sells food with imperfections but which is still wholesome under reduced-to-clear sections.

Food products that cannot be consumed any more are separated from their packaging and sent to be recycled into useful by-products by Sheng Siong's waste management partner, he added.

A Dairy Farm spokesman said the company was "committed to reducing wastage across our stores" and has implemented measures such as recycling packaging material wherever possible, tailoring inventory management to each store, as well as purchasing planning.

RedMart's head of grocery Richard Ruddy said that because all its products are in one warehouse, it is able to see an aggregation of consumer demand and predict orders more accurately.

"With nine years of data on consumer preferences, we are able to forecast demand down to the number of cartons of milk that will be purchased for a day."

He added that compared with a conventional market, the online grocery platform does not "need to stock up shelves across dozens of stores with fresh produce, of which not everything is sold and ultimately goes to waste".

RedMart, which is owned by Lazada, said it works with social enterprise UglyFood to resell some of the produce with slight imperfections at discounted prices. It also works with local start-up Crust Brewing to turn bread nearing expiry into beer.

Apart from supermarkets, bakeries here also throw out dozens of unsold bread items at the end of the business day.

FFTH has worked with bakery chains such as BreadTalk and Swissbake, as well as smaller neighbourhood bakeries and hotel buffet lines, to save bread from this fate with its 17-year-old Bread Run programme. Its pool of volunteers canvass more than 100 bakeries every night to pick up bags of unsold bread and deliver them to welfare homes and halfway houses, as well as community partners to get them to families in need.

Bread is inexpensive, so most people hardly give a second thought to throwing it out. But binning huge amounts of bread is problematic not only because it adds more trash to Singapore's fast-filling Semakau landfill, but also because the energy and resources put into producing it go to waste.

An employee operating a pallet jack at RedMart’s warehouse. Redmart says that as all its products are in one warehouse, it is able to see an aggregation of consumer demand and predict orders more accurately. ST PHOTO: LIM YAOHUI

Producing a loaf of bread involves a long-drawn process of growing and harvesting wheat, transporting the grains to the mill, grinding them into flour, and finally baking and packaging it.

Yet, bread continues to be one of the most undervalued items in people's eyes.

An NEA study in 2017 found that each week, about 2.5kg of avoidable food waste is thrown away by an average Singapore home. Bread, alongside rice and noodles, made up the most commonly wasted food items.

While FFTH's Bread Run programme has done a huge part in preventing wastage, a handful of bakeries told the charity they are reluctant to donate unsold bread because of liability issues.

"(There's always) the fear that someone eats the food and gets food poisoning," Ms Sim said.

Mr Louis Ng, an MP for Nee Soon GRC and chairman of the Government Parliamentary Committee for Sustainability and the Environment, is working to remove this barrier for businesses here that wish to give away unsold food products. The Good Samaritan Food Donation Act that he plans to table would provide legal protection for these businesses against such liability.

"There are huge amounts of food wasted, and then there are people who are going hungry.

If Singaporeans see that there is an avenue where they can donate to the less fortunate, I think that matches the two causes quite well," he said.

"That's why we wanted to do this piece of legislation - to really shine the spotlight on this issue, on food wastage, on the hungry."

About 1.3 billion tonnes of food is wasted globally each year, even as 800 million people in the world go to bed hungry every night.

Having good Samaritan laws in place would ease anxieties for businesses, said Ms Sim. But the challenge would be ensuring food safety standards for different types of food donated, she added.

Tips for reducing food waste when throwing a party

More on this topic: Helping buffet kitchens curb food waste by peeking into their bins