Second-quarter net profit up 7% to SGD 1.82 billion, second highest on record, on back of 17% increase in net interest income

Singapore, Hong Kong, Indonesia, India, China, Taiwan, 04 Aug 2022 - DBS Group achieved net profit of SGD 3.62 billion and return on equity of 13.3% for first-half 2022. Business momentum was broadly sustained in the first six months of the year while net interest margin rose after three years of decline. The gains were offset by lower wealth management fees due to weaker market conditions and a moderation in Treasury Markets income from the previous year’s high. As a result, total income was little changed and net profit declined 3% from the record a year ago.

For the second quarter, net profit rose 7% from a year ago to SGD 1.82 billion, the second highest in history. Total income grew 6% to SGD 3.79 billion. Net interest income increased 17% boosted by an accelerated increase in net interest margin, more than offsetting an 11% decline in non-interest income due to weaker market conditions. Asset quality continued to be resilient with specific allowances at eight basis points of loans. Compared to the previous quarter, net profit rose 1%.

Loans grew 7% or SGD 26 billion in constant-currency terms from a year ago to SGD 425 billion. In the first half, loans grew 3% or SGD 14 billion as non-trade corporate loans rose SGD 8 billion and trade loans increased SGD 6 billion. Housing loans and wealth management loans were little changed.

Net interest margin was 1.52% compared to 1.47% a year ago. Net interest margin, which had been declining since 2019, rose in the first quarter with the start of interest rate hikes, and the improvement accelerated in the second quarter.

Expenses were 5% higher at SGD 3.30 billion due to higher staff costs. The cost-income ratio was 44%.

Net interest income rose 12% from the previous quarter to SGD 2.45 billion. Net interest margin rose 12 basis points during the quarter to 1.58%. The increase was faster than the three-basis-point rise in the previous quarter as the impact of interest rate hikes was more fully felt. Loans grew 1% or SGD 6 billion to SGD 425 billion driven by trade loans and non-trade corporate loans. Housing loans and wealth management loans were little changed. Compared to a year ago, net interest income increased 17% as net interest margin rose 13 basis points and loans grew 7%.

Net fee income declined 14% from the previous quarter to SGD 768 million. Wealth management fees and investment banking fees were lower as market conditions further weakened during the quarter. Loan-related fees moderated from record levels. These declines were partially offset by a 9% increase in card fees. Transaction service fees were in line with recent quarters. Compared to a year ago, net fee income declined 12% as lower contributions from wealth management and investment banking more than offset increases in other fee activities.

Other non-interest income declined 15% from the previous quarter and 10% from a year ago to SGD 570 million.

Expenses were little changed from the previous quarter at SGD 1.66 billion. Compared to a year ago, expenses rose 7% led by higher staff costs.

Profit before allowances was SGD 2.13 billion, stable from the previous quarter and 4% higher than a year ago as higher net interest income was offset by lower non-interest income.

For the first half, Consumer Banking / Wealth Management income rose 6% from a year ago to SGD 2.88 billion. Higher interest rates and net new money inflows enabled total wealth management income to be maintained at the previous year’s level despite weaker market conditions. Institutional Banking income increased 13% to SGD 3.39 billion. The growth was led by a 51% increase in cash management income driven by higher interest rates and a 12% increase in deposits. Income from lending and treasury customer sales were also higher. These gains were moderated by weaker capital markets activity. Treasury Markets income declined 25% from the previous year’s record to SGD 702 million due to less favourable market conditions.

Asset quality continued to be resilient. The NPL ratio was stable at 1.3% over the six months as new non-performing asset formation remained low. First-half specific allowances amounted to SGD 236 million or 11 basis points of loans, compared to 18 basis points a year ago.

There was a general allowance write-back of SGD 135 million due to repayments and transfers to NPA. General allowance overlays built up in prior periods were maintained. Total allowance reserves amounted to SGD 6.69 billion, resulting in an allowance coverage of 113% and of 199% after considering collateral.

Liquidity was at a comfortable level. Deposits grew 5% or SGD 23 billion in constant-currency terms in the first half to SGD 528 billion. The loan-deposit ratio was little changed at 80%. Current and savings accounts accounted for 72% of customer deposits. The liquidity coverage ratio of 140% and the net stable funding ratio of 118% were both above regulatory requirements of 100%.

Capital continued to be healthy. The Common Equity Tier-1 ratio rose 0.2 percentage points from the previous quarter to 14.2%. The ratio remained above the group's target operating range as well as regulatory requirements. The leverage ratio of 6.2% was more than twice the regulatory minimum of 3%.

DBS CEO Piyush Gupta said, “We continued to deliver strong financial performance in the first half despite challenging financial market conditions. Net interest margin rose for the first time in three years and accelerated in the second quarter, while business momentum and asset quality were sustained. While the macroeconomic outlook remains uncertain, we will benefit from rapidly rising interest rates and have proven nimble in capturing business opportunities. The income growth will improve the cost-income ratio in the coming quarters even as we judiciously invest for the future. Our ongoing stress tests indicate that asset quality continues to be robust.”

Recognised for its global leadership, DBS has been named “World’s Best Bank” by Euromoney, “Global Bank of the Year” by The Banker and “Best Bank in the World” by Global Finance. The bank is at the forefront of leveraging digital technology to shape the future of banking, having been named “World’s Best Digital Bank” by Euromoney and the world’s “Most Innovative in Digital Banking” by The Banker. In addition, DBS has been accorded the “Safest Bank in Asia“ award by Global Finance for 13 consecutive years from 2009 to 2021.

DBS provides a full range of services in consumer, SME and corporate banking. As a bank born and bred in Asia, DBS understands the intricacies of doing business in the region’s most dynamic markets. DBS is committed to building lasting relationships with customers, as it banks the Asian way. Through the DBS Foundation, the bank creates impact beyond banking by supporting social enterprises: businesses with a double bottom-line of profit and social and/or environmental impact. DBS Foundation also gives back to society in various ways, including equipping communities with future-ready skills and building food resilience. 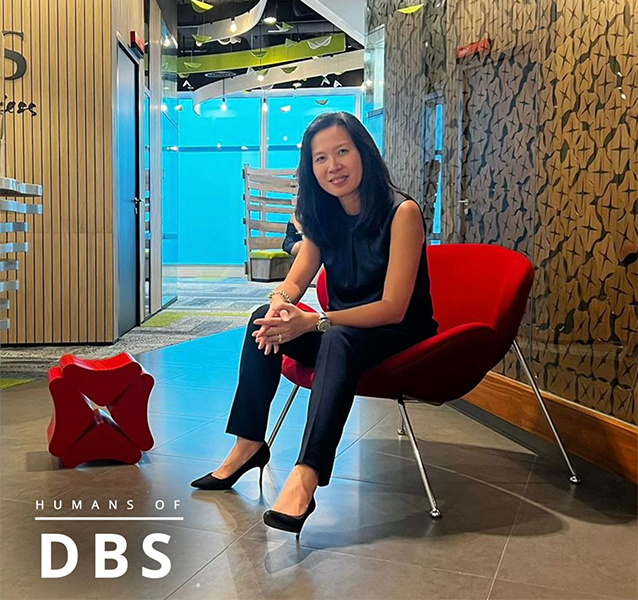 “Is there a way artificial intelligence and machine learning can tell us when an employee’s about...