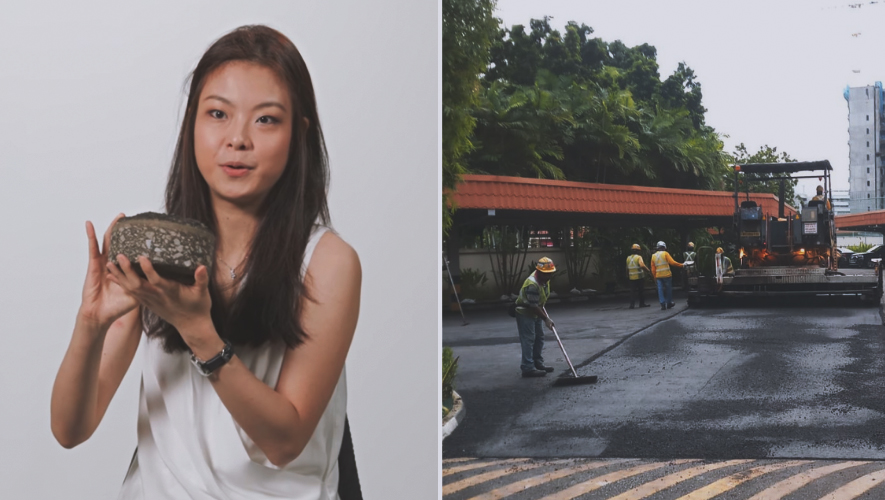 Oh Chu Xian attributes all that she has achieved with her start-up, Magorium, to being in the right space at the right time

Oh Chu Xian is only 28 years old but already, she has founded a promising start-up that could revolutionise a traditionally unsustainable and resource-intensive industry, and gotten her name in the Forbes Asia's 30 under 30 list.

Magorium was founded by Oh in mid-2019 to convert plastic waste into construction material used to lay roads, also known as bitumen.

The road leading to where Magorium is now was bumpy, considering how Oh had to break into the male-dominated industries of construction and waste management.

But after years of hard work and publicity, one could say that Oh is literally paving the way towards a more sustainable future.

Grew up playing in factories and on construction sites

Oh comes from a family with a background in road construction, and the business has been in the family since her grandfather's time.

As a young girl, Oh's father would let her and her siblings tag along to their company's factories and construction sites where bitumen and other infrastructural materials were manufactured.

This was Oh's first glimpse into the immense amount of resources, especially fossil fuels, that are extracted and pumped into the construction of Singapore.

Around eight years ago, her father started a project to search for alternative sources to fossil fuel.

The man's intentions were purely economical — the prices of crude oil and other fossil fuels are highly volatile, and this trickles down the chain to affect construction businesses as well.

As part of the project, the family business worked with external and internal researchers to develop new technology capable of creating a sustainable and more cost-efficient type of bitumen.

After years of prototyping, they were able to develop NEWBitumen, a road construction material made from plastic waste.

Recognising the opportunity to kill two birds with one stone — plugging gaps in both the construction and waste management industries — Oh saw the opportunity in commercialising this technology.

An edge over other plastic recycling companies

Collecting the plastic waste and breaking it down chemically in a process known as depolymerisation.

Configuring the molecules (that previously made up plastic compounds) into a compound that replicates that of traditional bitumen.

Catalysing the chemical link between the different molecules to create NEWBitumen.

One rather significant perk of Magorium's technology compared to other recycling facilities is that it is able to process various types of plastic indiscriminately.

"Plastic is one of the biggest problems because there are just so many factors to it and so many different types of plastic and additives that go into creating [it].”

"So let's say [at] a very traditional recycling plastic plant in Indonesia, you need to choose what kind of plastic you want to recycle. And let's say if it's a PET plastic plant, they cannot accept any other form of plastic, but only PET bottles. So even the bottle cap that is HDPE, they cannot accept the cap that comes together with the bottle. And the thing is that even if it's PET mixed with something else as a whole product, not even a separate product, they also cannot accept it, which means that other plastics are considered contaminants. So that is one of the biggest problems with plastic recycling."

Magorium is not limited by these constraints as the plastic waste they take in, whatever type it is, is ultimately broken down by depolymerisation and subsequently reconstructed to form NEWBitumen.

Eliminating the manpower-intensive process of sorting through the plastic waste collected has also been crucial to reducing cost.

By using plastic waste to create bitumen, Magorium provides an alternative to mining virgin materials, which is a destructive process to the environment.

Here's a nifty graphic to show the comparison between the impacts of manufacturing traditional bitumen and NEWBitumen.

Oh said that Magorium is how she and her siblings hope to continue the road construction business but in a more innovative and sustainable way.

"Our ambition is to create a circular economy for plastic waste that feeds directly into responsible and minimal-waste urbanisation, cutting out pollution through excessive transportation, refining and unnecessary cleaning."

Starting Magorium and convincing people of the technology's viability was no easy feat though.

Fresh-faced Oh, with her novel method, thus faced some pushback.

"For me to go to someone who has been doing it for the longest time, who has been profiting [from] it, and me telling them like 'Oh, you guys should try a new way of doing something'. People will [either] just dismiss me as not knowing what I'm talking about or they don't want to change."

But as Magorium started receiving more publicity, Oh did see a change in perceptions and increased recognition of her company's credibility.

Similarly, Oh's father wasn't too convinced initially about his daughter striking out on her own, but ultimately gave his full support.

Rather impressively, Oh was one of 27 Singaporeans who made it onto the Forbes' 30 Under 30 Asia list in 2021.

Although this came as a surprise to her, Oh sees this as proof of the waves she's making.

"That was definitely super surprising. Very, very surprising. Because from what I know, [other] founders [on the Forbes list] have been, you know, working and developing things and building things for years. And they're very impressive and that's how they got in. But I got in within one year of the incorporation of Magorium, so I thought that was really, really surprising. But I also kind of saw that as validation, you know, of the direction that I'm moving forward and the impact that I'm creating."

Plastic recycling in Singapore still appears to be in its fledgling stages — only 36,000 tonnes out of the 868,000 tonnes generated in 2020 were recycled, making for a recycling rate of four per cent.

However, the company is working with schools such as Temasek Junior College and Yuan Ching Secondary School to conduct recycling drives, something which Oh shares she can see scaling up beyond the current pilot programme.

Thus far, Magorium was able to collect a total of 100kg of plastic waste from these recycling drives.

And although the company is only at its pre-commercialisation stage, it is currently able to process around 100kg of plastic waste per day.

Additionally, NEWBitumen has already been used to lay two roads in Singapore — a carpark of a factory site in Tuas and the carpark and driveway of a condominium in Marymount, effectively diverting over 2,500kg of plastic waste from incineration.

Banning plastic will have its consequences

Despite dedicating all her time and energy into Magorium with the goal of cutting down the plastic waste generated, Oh delivers an interesting take — she does not believe plastics should be banned.

Oh cites plastic bag charges as a positive development, but acknowledges how reliant Singaporeans are on the material, speculating that people are likely to purchase plastic bags just to line their bins.

"So even though it is a good initiative, I feel that there are some indirect consequences here and there, you know, that will still kind of lessen the overall impact that Singapore wants to see when they stop charging for plastic bags and [other disposables]."

Referencing a documentary she watched, Oh notes that the biggest problem faced when it comes to reducing plastic usage is that plastic is "just way too good".

"You know, it has just so many benefits that cannot be replaced by any other material in this world. To just cut it off altogether and to kind of ignore how good it is [will bring about] other indirect consequences that come with it. [...] It is not viable to just say 'let's stop using plastic altogether', which I think is kind of the message that a lot of students are getting -- 'Let's just ban plastic. Why isn't the government banning plastic?' But we cannot just ignore all the benefits of plastic and say 'let's just stop using it altogether'."

Instead, Oh believes that the most impactful method to tackle plastic waste is technology, such as Magorium's.

She also suggests perhaps finding a way to make plastic bags compostable or biodegradable in a short span of time. Incidentally, this is something which scientists at the Nanyang Technological University are looking into.

Magorium was one of the awardees of the DBS Foundation Social Enterprise Grant in 2021. The additional funding has helped Magorium scale up in capacity and volume, as well as in patenting their technology.

Their goal is to scale up their facility to be able to process 100 tonnes of plastic waste.

To get there, however, is a huge financial risk, Oh said.

Therefore, the company is aiming to build a pre-commercialisation prototype that can process around three to five tonnes of plastic waste.

This will enable the team to accurately predict and forecast the cost, manpower, and energy consumption needed before scaling up the facility.

The funding from DBS has also supported Magorium in their community and engagement efforts, such as conducting pilot recycling drive trials in various schools across the island.

Despite all of Oh's accomplishments, she attributes her progress with Magorium to being in the right space at the right time, as a green movement has been building up in recent years.

"I think right now, really, the stars have all kind of aligned, the government is pushing both private organisations as well as government agencies to go green, to just find ways and means to recycle plastic. Yeah, so I felt that it wasn't just the publicity that helped [Magorium], it was really all of the stars just aligned."