BY VANESSA LIU AND JUDITH TAN, FIRST PUBLISHED IN THE STRAITS TIMES, 05 JAN 2021 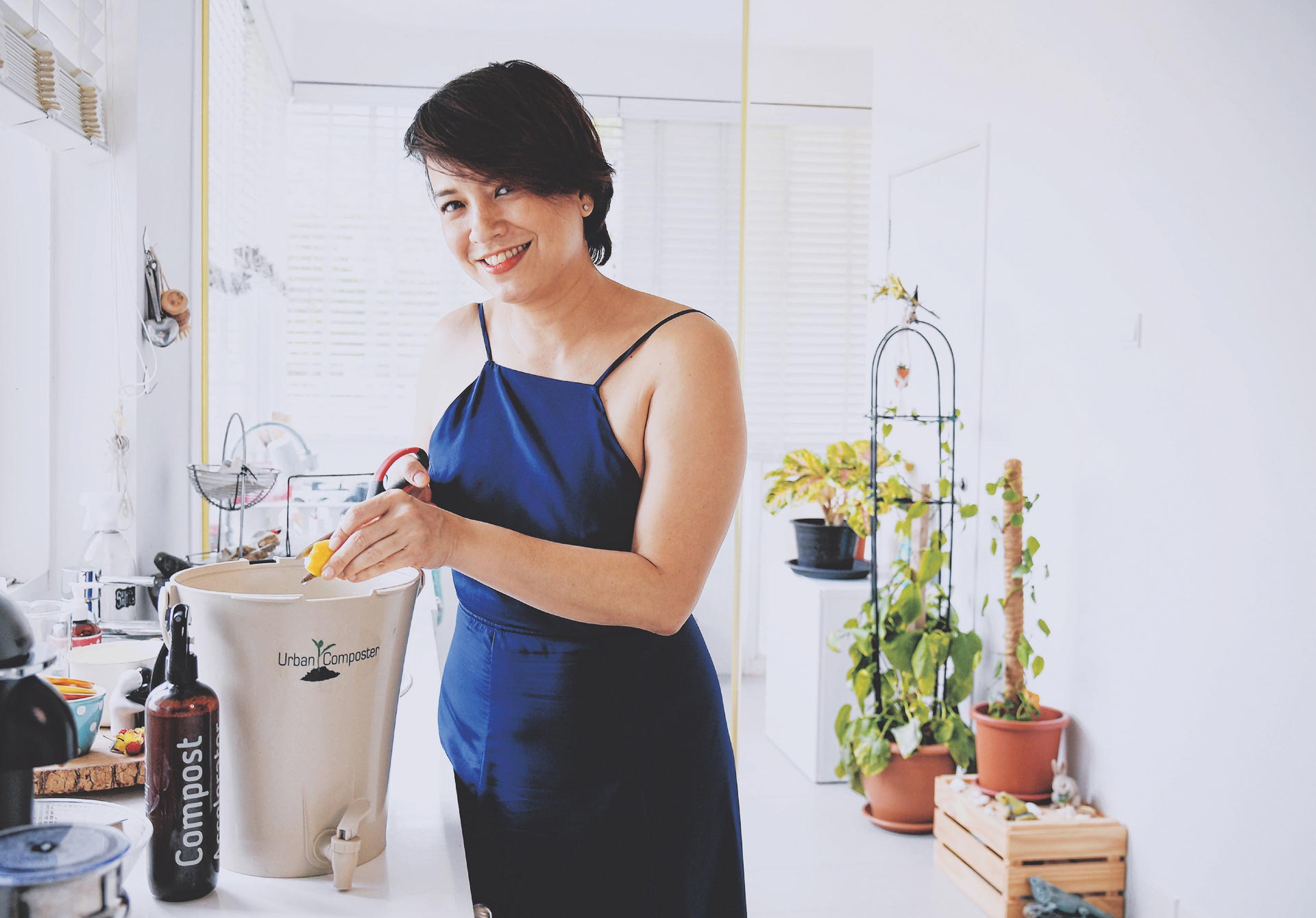 More than 26,000 tonnes of unconsumed food worth $342 million are thrown away by households every year because the food wasn't stored or handled properly, or was bought without thinking. But things may be changing, according to a 2019 survey by the National Environment Agency (NEA), which found consumers are more environmentally conscious now when they shop, cook, and cater. The Sunday Times, in partnership with DBS Bank, gets to the bottom of things, as Judith Tan and Vanessa Liu raid two homes to see if the findings are true

The average Singapore household throws away 5kg of food waste every week, which might not seem like much, but taken altogether, means 26,000 tonnes and $342 million ending up in the landfill.

Half of it needn't have been thrown away, which is why 47-year-old ONE FM 91.3 DJ Angelique Teo takes pains to make sure that doesn't happen in her home.

Her strategy is to plan ahead and make conscious choices, says Ms Teo, who lives with her husband in an apartment in Yio Chu Kang. Both of them are vegan, and eat no meat, eggs or dairy products.

"I do a weekly grocery run online and I buy exactly what we need for our daily salads. For example, I may get four boxes of coriander, four boxes of kale, some cherry tomatoes and lemons - just the right amount," she says.

In addition to buying just enough for their meals, Ms Teo, who helms the evening drive time show, also stores dried foods like nuts and mushrooms, and freezes herbs, in recycled glass jars.

"I get my dried goods in bulk from the zero waste shop just down the road," she says.

The goods have no packaging, so the glass jars come in useful.

"They are also handy when I'm freezing things like chili padi, which I have to have, and herbs, which wilt quickly," says Ms Teo.

"I wash them, chop them, bottle them and put them straight into the freezer to have at any time."

It may be easier to reduce food waste when there are only two in the household. But at the seven-member Ho household in Kovan, minimising food waste has also become a habit.

Mistress of the home, vice president of payments and platforms at DBS Jennifer Yong, 50, says she goes to the wet market in Chinatown every Sunday to stock up on groceries, "mainly meats, bones for soup, and vegetables".

"I have three generations under one roof - my parents, my boys, my husband and myself and our Burmese helper. Catering for each and everyone's taste can be a rather daunting task," she says.

"But we are very conscious not to overbuy or overstock items at each time. Although we have two fridges in the home, we would rather buy less than more.

Then, as and when it is needed, more can be bought, she says. "With two teenage sons who are often ravenous, I do have to check with my helper by Wednesday if there is still enough food in the fridge.

"If not, I'll have her go to the wet market here in Kovan to replenish our supplies."

The Hos also prefer to have a greater variety of smaller plates of food at dinner, which helps to generate less waste.

"We cook smaller portions for the common dishes at meal time, instead of large portions. This works because we can have more variety at the table.

"Should there not be enough of, say, vegetables, then we will cook an additional dish during the meal. Besides reducing our food waste with no leftovers, everyone gets to enjoy his or her favourite dishes," she says.

Those managing Singapore's landfill would welcome it if more households practised sensible habits when eating at home.

Vice president of payments and platforms at DBS Jennifer Yong at the Ho family home, where minimising food waste has become a habit. PHOTOS: COURSTESY OF JENNIFER YONG

A 2019 study by the Singapore Environment Council found that the 26,000 tonnes of food wasted by households every year comes from improper storage and handling.

Often, people are unaware of how much waste can be accumulated through their consumption habits.

In a Sunday Times poll of 1,000 residents conducted by online market research firm Milieu Insight in October, fewer than one in six got it right that food waste from households added up to a total of $342 million every year.

The vast majority underestimated the amount, and nearly all respondents said their households threw away only small or "reasonable" amounts of food.

Asked 14 multiple-choice questions like the difference between "sell by", "use by" and "best before" dates, and how soon the Semakau Landfill would reach capacity, close to half got fewer than seven right.

Food waste is a problem not just because it adds to Singapore's only landfill - which is expected to be full by 2035 - but also because of the significant amount of resources and energy wasted that go into growing, processing and transporting food.

Ms Teo and Ms Yong decided instead to recycle their food waste by composting it.

In the landfill, food scraps do not break down easily, because of the lack of oxygen inside the landfill, notes Ms Teo. Broken down by micro-organisms in the absence of oxygen, they emit methane, a greenhouse gas that is absorbed into the atmosphere and contributes to temperatures rising.

A 2018 Oxford University study published in the journal Science found food wastage to be responsible for about 6% of global greenhouse gas emissions. About half of the emissions come from the anaerobic fermentation of solid waste disposal on land.

In her apartment, Ms Teo uses a compact composter acquired from The Green Collective SG, a group of sustainable brand owners, conscious consumers and businesses.

The Urban Composter was designed by Australian Luke Gregory, and is based on the Japanese fermentation method called Bokashi, which uses soil containing micro-organisms to cover food waste.

According to founder of The Green Collective SG Danielle Champagne, the Urban Composter is a compact fermenting vessel that conditions food waste with effective, probiotic microorganisms that is fast and anaerobic, producing no greenhouse gases. Once fermented and saturated in microbes the scraps are introduced to soil and rapidly break..

Ms Teo says, "After putting the scraps in the composter, I use an accelerator made from fermented fruit extract to hasten the process. I spray three to five squirts each time I pile on more scraps and about a week and a half later, I get compost juice."

She dilutes the sour-smelling leachate, called Bokashi tea, and sprays it on her potted plants as a fertiliser.

She adds, laughing, "Bokashi tea also has a super power. It is completely natural and when it is concentrated, it helps unclog the drains. I have very good flowing sinks in my house all the time because of Bokashi tea that comes from the composting."

"Nothing goes to waste. I created a bin from an old waste bin in the kitchen and repurposed it for composting. I put in the food waste and let it break down on its own.

"To mask the smell I throw pandan leaves in."

Ms Yong says she uses the compost on her patio plants and no longer has to buy soil or fertiliser.

Last year, she also grew her own herbs and vegetables such as Thai basil, red spinach, bok choy and dou miao.

She empties the compost bin out once every six months, and throws some of it around the plants in front of her condo block.

"The compost goes to both my plants and the grounds at the condo, which is why the plants there are thriving," she says.

While composting has yet to become common in Singapore, a 2019 survey commissioned by the National Environment Agency (NEA) to track the sentiments of Singapore residents about food waste found that the public has become more environmentally conscious while shopping, cooking, eating and catering.

While taking small steps as a consumer can be significant in achieving the larger goal of shrinking food waste to a minimum, Ms Yong would like to see school children taught practical ways of how to do this at home.

She says, "The reason why cutting food waste in Japan is successful is because it is taught to the children as early as kindergarten.

"Perhaps NEA would like to work with the Education Ministry to have lessons on food waste included in the social studies curriculum. This way, we can ensure that Singapore reaches its zero waste goal."

Tips for the kitchen: how to make food last longer

More on this topic: Kenny Eng found a use for 'ugly' produce