BY EUNICE QUEK, FIRST PUBLISHED IN THE STRAITS TIMES, 16 AUG 2021 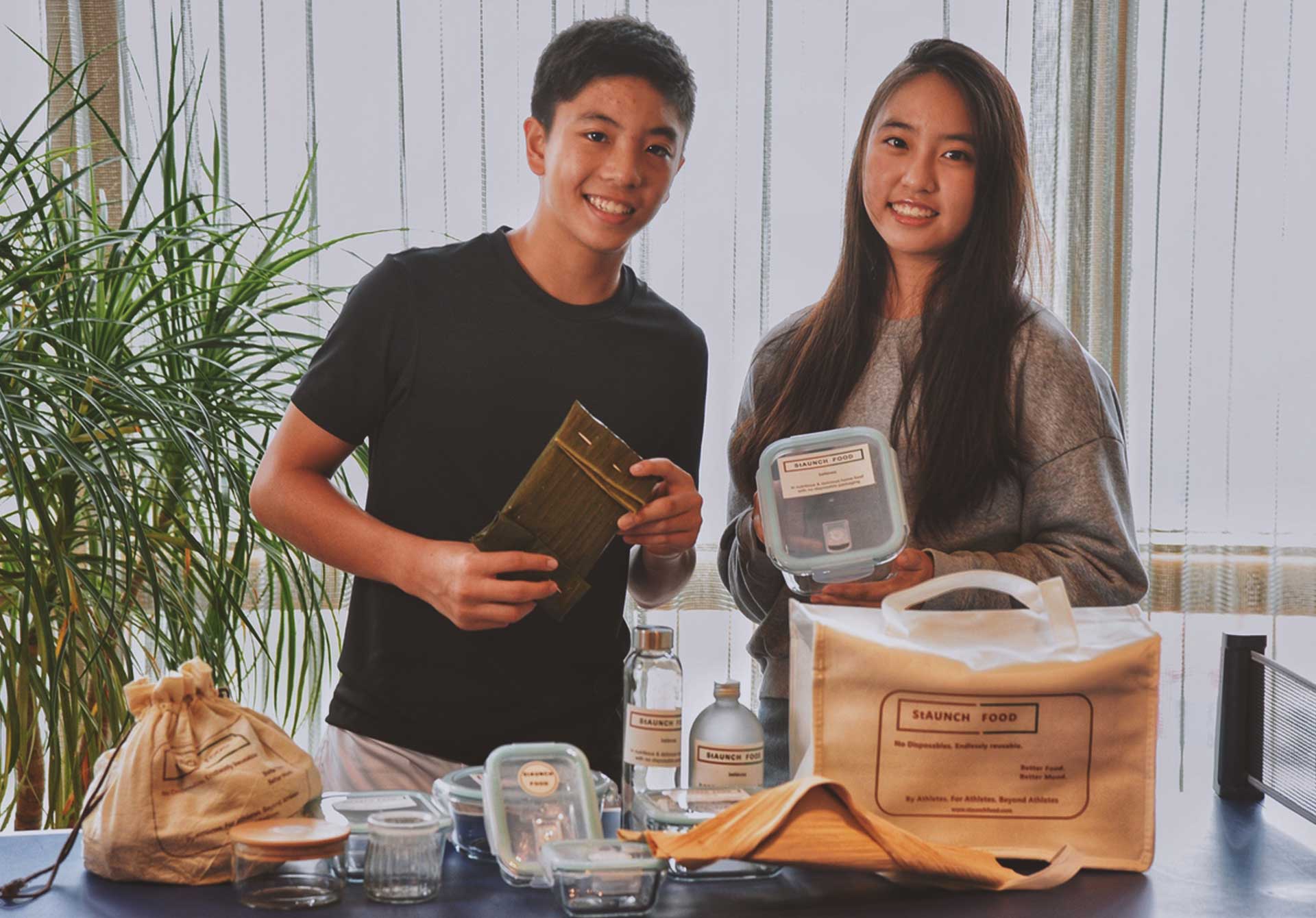 It's a balancing act between operational needs and waste reduction

With food delivery becoming the norm during the pandemic, it has been increasingly challenging for food and beverage (F&B) businesses to reduce waste and cut down on packaging.

During the periods when dining in was banned, many restaurants also had to deal with clearing extra food stocks. Then, many capitulated to the convenience of single-use disposable packaging, since hygiene is a major concern now for diners.

The group uses compostable, biodegradable and recyclable packaging where possible, and makes a conscious effort to avoid packing food in multiple packages.

This means using one compartmentalised box for a set meal - instead of many containers - yet still ensuring food reaches customers in the best condition possible, still warm and without spillage.

Any of these factors gone wrong could cost restaurants in terms of refunds, although the delivery process is often outsourced and "out of our control", he says. "Though we are conscious about reducing waste and try to use as little packaging as possible, sometimes more packaging is required so the food arrives to the customer without any issues."

For takeaways, he observes that some customers request multiple bags and encourages them to take along their own, in addition to containers.

To reduce food waste, the Les Amis restaurants also focus on condensed delivery and takeaway menus during no dine-in periods.

Other practices include monitoring inventory closely to buy just the right amount of ingredients that can be used in their entirety. For example, the stems and roots of vegetables, as well as pork, fish and beef bones, can be used for soup stock. Off-cuts of beef and pork can also be used for burger patties.

Going one step further are the teenage founders of four-month-old home-based business Staunch Food, who are on a mission to prove that F&B companies can be profitable by eliminating disposable packaging altogether.

Ms Claire Chan, 16, and her brother Bill, 15 - both tennis players who have represented Singapore in international competitions - use only oven- and microwave-grade glassware, as well as banana and opeh leaves to package food. Their signature dishes, such as wagyu beef bourguignon ($35) and aged parmesan garlic chicken ($28), include the cost of the glass containers they come in. Islandwide delivery costs $7.90.

Customers can keep the containers or return them upon their next order for a refund of up to $4 each.

Ms Chan acknowledges that it is challenging for struggling hawker stalls with slim margins to do away with disposable packaging.

"We empathise that their livelihood comes first and understand why they have to leave the zero-disposable responsibility to buyers. But we hope that businesses which have the means to do so will take up the responsibility to offer zero disposables by default," she adds.

Orders vary on a weekly basis, but, so far, they have saved more than 3,000 disposable containers, 1,000 bags, and 5,000 sets of cutlery - equivalent to the number of meals sold since day one.

At Grand Hyatt Singapore, the push to reduce food and packaging waste extends beyond the kitchen. This year, the hotel installed a food waste-monitoring system and created a committee to brainstorm new approaches to reducing waste.

The hotel's director of food and beverage Sebastian Kern, 34, says: "Understanding the daily waste and what goes into the bin is essential. When we waste food, we waste all the energy and resources that go into producing, processing, transporting and cooking it.

"We also lose the money spent - meaning that businesses are less efficient and competitive than they could be, and we have spent money unnecessarily."

The hotel has a nose-to-tail beef programme where it imports whole beef carcasses from Yulgilbar Cattle Farms in Australia. It also operates a food waste-management plant which includes a digester system that converts excess food into fertiliser for landscaping purposes.

Among its initiatives geared towards minimising food waste, the hotel works with local start-up Treatsure for its takeaway $10 buffet- in-a-box during the last hour of meal times at its buffet restaurant StraitsKitchen and Pete's Place.

Treatsure chief executive and co-founder Preston Wong, 32, estimates that the start-up has saved 10,000kg of waste from buffet meals - from late 2018 to April last year - across 18 buffet restaurants that he works with. The buffet-in-a-box service took a hiatus when the circuit breaker hit last year. It restarted in July for two weeks, took another break, then relaunched this month with three hotel partners.

Even as more people order food delivery, he notes that more are also preparing their own meals and becoming more conscious of their purchases.

He says: "Being cost-conscious amid the difficult economy also helps people buy what they need and not over-indulge in spending on food and contributing to waste."

No cutlery by default

Online food delivery platforms are also chipping in to reduce on disposables. Now, by default, customers do not get disposable cutlery unless they opt in when placing an order.

When foodpanda Singapore started its opt-out feature in 2017, 80 per cent of customers chose to get cutlery. This has since fallen to 10 per cent, says Ms Laura Kantor, its marketing and sustainability director. Over the past four years, this has cut down the wastage of more than 25 million cutlery sets.

Deliveroo's spokesman, too, says it has reduced about 90 tonnes of plastic waste since it launched its "opt-in" cutlery function in 2018. Grab saved close to 380 million sets of cutlery just last year alone.

To reduce food waste, restaurant partners on these platforms have full access to sales data to determine which menu items are less popular, so they can plan to remove or produce less of that dish.

All three platforms also work with reusable container service barePack. Instead of having food packed in disposables, diners can opt for barePack reusables from participating restaurants. They can return the containers to any of the 150 eateries on the barePack network that also use the service for takeaways. The sign-up fee to be a member costs from $1.50 a month for an annual plan.

Foodpanda also partnered DBS last month to run last-hour deals. Customers could get 50 per cent off restaurant orders made from 9pm to midnight, to feed late night hunger pangs but also help restaurants use up food that would otherwise go to waste.

While awareness of food waste has been increasing, barePack's chief executive and co-founder Linh Le believes it will still take a long time for Singapore to become a zero-waste nation.

She says: "We have been enjoying the convenience of plastic and it is deeply rooted in our habits. Now, when we switch the behaviour, it will take a lot of effort from everyone involved. You need a big push from the Government. Some will not change till policies are in place."

1. Plan your food portion to match the right container sizes.

2. Closely monitor the demand for each dish and the quantity sold, to better estimate how much ingredients to order.

3. Give small incentives to consumers who take along their own shopping bags or takeaway containers.

4. Be open to conversations and collaborations with sustainability-driven start-ups on waste reduction.

1. Purchase a sturdy container which can last easily three to four years, if well taken care of.

2. When ordering food delivery, leave a request in the instruction notes - for example, for less rice - or highlight your food preferences, like no dips or sauces, so as not to waste food.

3. A "best before" label is not the same as a "use by/sell by" label - it does not mean the food will turn bad on that particular date. Eyeball or smell it to see if a product has gone bad.

This is part of a series presented by DBS and The Sunday Times exploring the environmental impact of everyday food choices, and how consumers can live more sustainably when it comes to what they eat, and how much they leave behind.