hello
Can our favourite prawn mee and curry debal inspire us to eat towards a more sustainable future?

Can our favourite prawn mee and curry debal inspire us to eat towards a more sustainable future? 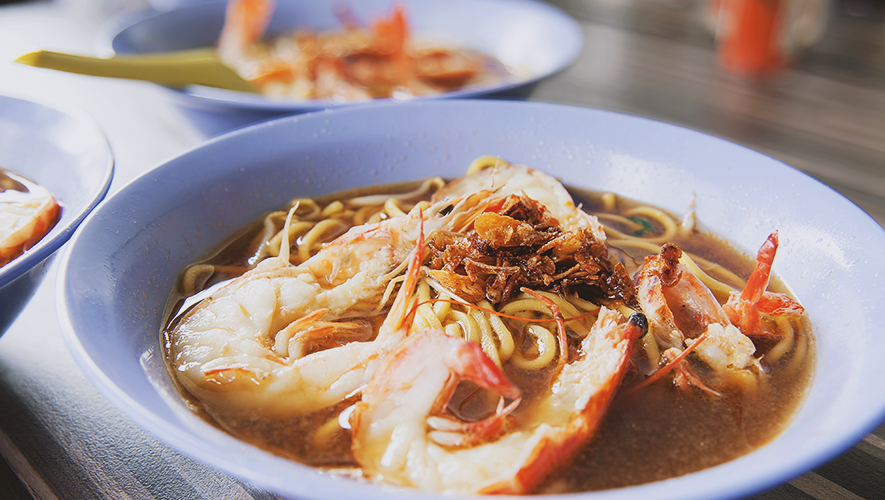 As with most industries, the practice of sustainability has pervaded restaurants and food purveyors across the world. Today, adopting a zero-waste waste approach in eateries is as de rigueur as ensuring our drinking water is clean. Chefs pride themselves on turning vegetable trimmings like broccoli stems into delicious condiments like hummus, giving meat off-cuts billing, and turning ingredient residue into animal feed.

This practice, of course, is not new. Our ancestors practiced the principles of zero waste and eco-sustainability long before those buzzwords were coined. For evidence, we need only look to some of Singapore’s quintessential dishes.

Prawn mee soup is but one shining example. Traditionally, the broth is first made by frying pork ribs, pork bones and perhaps pigs’ tails in lard. The cooked meat is then set aside before aromatics like garlic and shallots are added to the pot for stir-frying to release their robust fragrance. Back in goes the pork, along with some water, all of which is left to simmer over the course of several hours to extract all every ounce of flavour.

Evidently, the only waste in the service of prawn mee rests solely on the shoulders of those who leave any part of the dish uneaten.

The same goes for chicken rice. Brought to Singapore by Hainanese migrants in the early 20th century, chicken rice is not merely an emblem of Singapore’s hawker culture, but also of the waste-not-want-not attitudes of old.

The best chicken rice chefs skillfully poach whole chickens in water infused with ingredients like ginger and scallions before plunging them in an ice bath to seal that prized layer of aspic between skin and flesh. The fatty trimming from the chicken, along with some of the poaching liquid, go on to flavour the grains of rice as they cook. The remaining broth is served as a comforting brew alongside the chicken rice. Again, little goes to waste when it comes to making this popular staple.

Even celebratory dishes have their roots in waste minimisation. Curry debal, traditionally made and eaten by Eurasian families on Boxing Day, began as a way to repurpose leftovers from the Christmas meal. That explains the tasty ham and bacon bones, roast meats and sausages that make this fiery stew so moreish. Though many families now marinate and cook the roast meats in order to make “devil”, as the stew is affectionately referred to in many households, the dish itself is a nod to a time when waste was far less prevalent.

Back to the future

Suffice it to say, times have changed. According to an NEA study conducted from November 2016 to March 2017, households in Singapore threw out 2.5kg of avoidable food waste every week. Among the most commonly wasted items were rice, noodles and bread. The good news is that more than half of this food waste could be prevented if we are more mindful of the food we buy, order or cook.

To do better, it would bode us well to honour the adage of looking back to look forward. We need only take a leaf from the everyday cooks that came before us to appreciate how using every ingredient to its fullest can yield delicious dishes that transcend time.