BY JUDITH TAN AND VANESSA LIU, FIRST PUBLISHED IN THE STRAITS TIMES, 30 NOV 2020 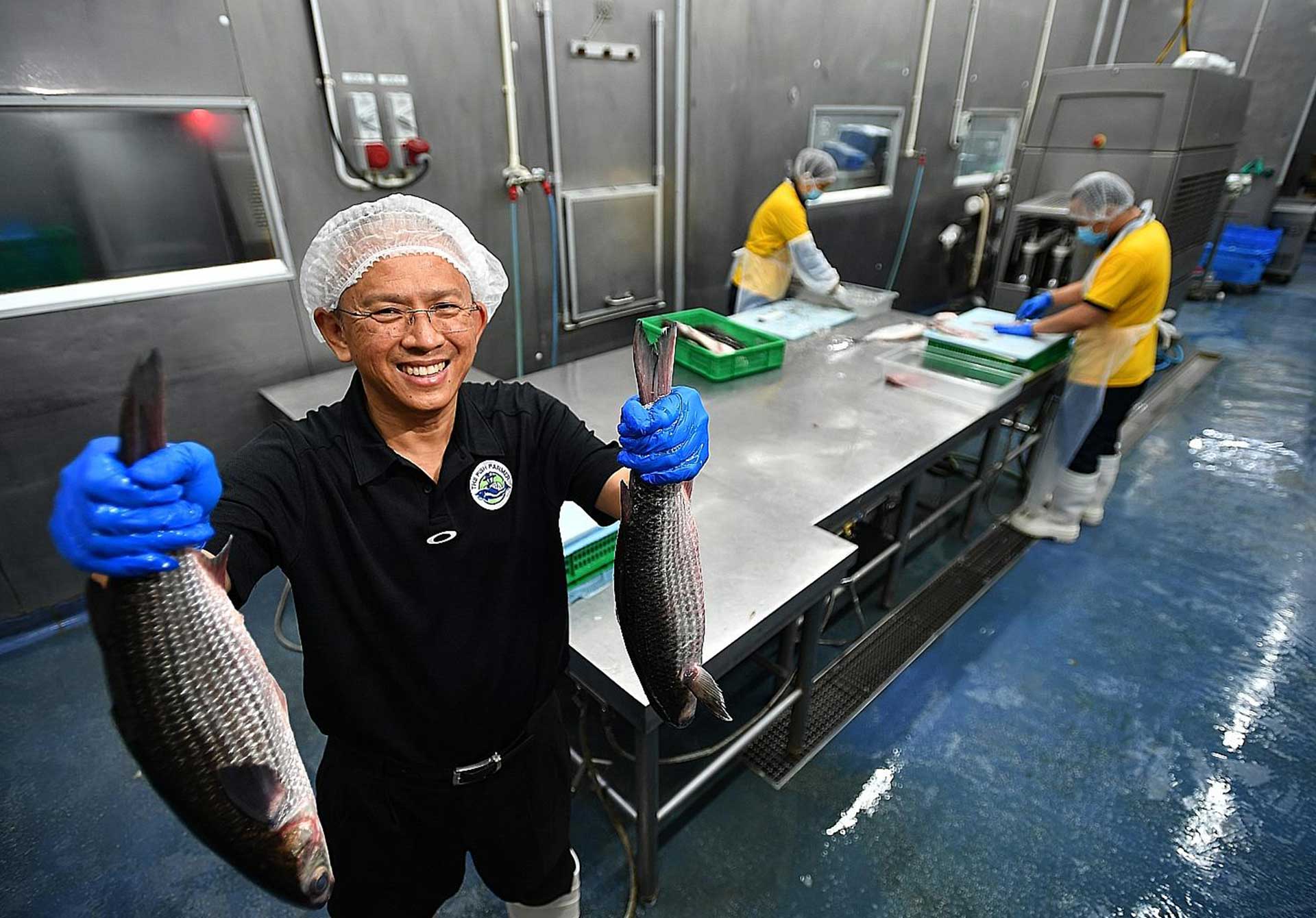 Food waste is one of the biggest waste streams in Singapore, and 40% is generated by the commercial and industrial sectors that handle fish, other seafood and vegetables. In this second instalment of a six-part series on food waste, The Sunday Times, in partnership with DBS Bank, dives into a fish farm. Judith Tan and Vanessa Liu explore how the farm's waste is raw material for a restaurant as the food industry pushes towards zero food waste

It is no fishy business to say that from the moment a fish is harvested to the time it lands on your plate, about 30% of it would have been lost as waste. With today's affluence and preference for the convenience of a fish fillet, this proportion can sometimes double.

Mr Ong, 57, started to work last year with Hai Sia Seafood, one of the largest seafood processors in Singapore, to have the grey mullet, one of the species he farms off the coast of Lim Chu Kang, processed into fillets and sold at supermarkets such as FairPrice.

According to The Fish Farmer's website, grey mullet is an oil-rich fish that is high in omega-3 fatty acids and vitamins. Its meat is of a medium to firm texture and has a rich, distinctive flavour.

The fish can be prepared in many ways - including steaming, grilling and pan-frying - and is a favourite among Teochews.

For Mr Ong, it makes business sense to send 3,000kg of mullet a day to Hai Sia Seafood to be filleted, but it worried him to see the offcuts, comprising the head, bones, trimmings and the rest of the meat, being thrown away.

"The fillet is just meat. It makes up only 40% of the entire fish. So the rest of the fish - 60% - would have been thrown away. These are perfectly good parts of the fish," he says.

Food waste is one of the biggest waste streams in Singapore, and the amount of food wastage generated has ballooned by about 20% over the past 10 years.

The National Environment Agency estimates that 40% of food waste generated here is from the commercial and industrial sectors that handle fish, other seafood and vegetables.

Last year alone saw around 744 million kg of food wasted. That is equivalent to two bowls of rice a person a day, or the weight of about 50,000 double-decker buses.

A study by the Singapore Environment Council and consultancy firm Deloitte Singapore last year found that the fish and seafood sector contributed the second-largest volume of food loss, at about 25,000 tonnes a year.

According to market and consumer data provider Statista, more than 125,000 tonnes of seafood was imported to Singapore, and approximately 5,340 tonnes was produced here last year. About 124,200 tonnes was consumed, translating to about 21kg a person.

World Wide Fund for Nature (WWF) Singapore's head of market transformation Stefanie Beitien says how food is produced and consumed is the biggest threat to the planet today.

Despite the high environmental cost of food production, a third of all food produced goes to waste.

"Seafood supply chains are often long and complex, spanning businesses across fisheries, aquaculture, suppliers, retailers and end consumers. Food loss and waste happens at every stage across this value chain, so any measure that reduces the distance between farm to fork helps," Ms Beitien says.

Mr Malcolm Ong, chief executive of The Fish Farmer, at Hai Sia Seafood with mullet from his fishery. Processing 3,000kg of mullet into fillets can leave as much as 1,800kg of offcuts, such as heads, bones and trimmings. ST PHOTO: LIM YAOHUI

At farm level, sustainable aquaculture production practices that minimise environmental impact and enhance efficient use of resources can contribute to higher survival rates of farmed fish.

"Companies along the seafood supply chain should set targets that track and measure food waste from source through point of sale.

WWF-Singapore is working with businesses across the seafood industry here to help them adopt sustainable sourcing practices and improve overall industry standards, she says.

As early as 2016, businesses such as retailers, restaurants, hotels and seafood suppliers came together with WWF-Singapore to crowdsource industry solutions at a Sustainable Seafood Business Forum.

Working with WWF-Singapore, they commit to responsible sourcing standards and pave the way for the rest of the industry to follow suit.

Says Ms Beitien says, "Restaurateurs, retailers and the F&B (food and beverage) industry have influence over shaping consumer preferences. As 'nose to tail' and 'root to stem' cooking are already popular culinary concepts, the 'fin to gill' approach can be easily adopted by the seafood industry.

"The industry can create products with offcuts, such as broth or chowder. Even non-valuable fish can be turned into soap, glycerol or fertilisers.

"Shell waste from crabs, shrimps and krill are the main sources for the extraction of chitin and chitosan, which are used in the biomedical, cosmetic and food industries."

Not all has to be wasted

The loss, says Mr Ong, begins as far upstream as the fish farms - when fish are at the fry stage.

Every year, his farm buys between one million and 1.5 million mullet fry at 20 cents each, which comes up to about $300,000. By the time the mullet mature and are ready for the dinner table at 18 months, half of the fry would not have made it, he says.

Add to that the loss of as much as 1,800kg of offcuts from the 3,000kg of mullet processed into fillets daily, "and such wastage is too high", says Mr Ong.

Things changed after he was put in touch with Ms Anna Lim, founder and chief executive of home-grown restaurant chain The Soup Spoon.

"I remember that Kenny introduced us, wanting us to collaborate and upcycle raw products to cut food waste," says Mr Ong, referring to Mr Kenny Eng, 46 - director of horticultural business Nyee Phoe Group and its Gardenasia arm - whose personal passion is to encourage the use of locally produced foods and upcycling of food waste.

"It was also his pet project to get local farmers and businesses to work together. It was then that we brainstormed and came up with the idea of using the offcuts to make soup," Mr Ong adds.

"Then if the farmer is lucky, he may be able sell off some of the offcuts and bones at a much reduced price, but most of the time, they are thrown away, as the cost of warehousing is very high in Singapore.

"There is still a lot of meat clinging to the bones of the offcuts, and it does not make sense to turn these into stock."

Having worked on similar projects overseas, Ms Lim says she wanted to do more for Singapore brands and produce.

"It was in 2018 that I met Malcolm, and we wanted to see how we could collaborate on a platform to showcase local produce. Through this platform, leveraging The Soup Spoon brand and our expertise in making soups and stews, we are able to upcycle the offcuts to create delicious recipes and showcase local produce and the work of local farmers and (get) better margins for them," she says.

The Soup Spoon processes about 7.2 tonnes of fish offcuts and 10.8 tonnes of chicken offcuts a year to create stocks, soups and chowders.

Fishery company The Fish Farmer sends the mullet it farms to Hai Sia Seafood, which scales the fish and processes it into fillets. Instead of the offcuts being discarded, they now go to restaurant chain The Soup Spoon, which uses them to make packs of take-home soup. ST PHOTO: LIM YAOHUI

Fishery company The Fish Farmer sends the mullet it farms to Hai Sia Seafood, which scales the fish and processes it into fillets. Instead of the offcuts being discarded, they now go to restaurant chain The Soup Spoon, which uses them to make packs of take-home soup. ST PHOTO: LIM YAOHUI

Ms Lim says that for their partnership, The Fish Farmer provides the odd parts and bones "while we create the recipe, process the fish and create take-home soup packs featuring both the farmer and the produce on the pack", producing batches of 250 packs in seven working days.

"With this collaboration, we managed to cut the wastage (of the mullet) by 50% and reduce our carbon footprint, but we are not stopping there. We are still looking for ways to do more," Ms Lim says.

Ms Beitien says businesses that make responsible decisions have the potential to create positive environmental impact at scale. This is particularly crucial in the food industry, which handles large volumes of food daily.

"While the use of offcuts is a creative and cost-effective solution, it is also important that this is coupled with other sustainable practices, such as well-managed inventories, portion control and purchasing responsibly sourced seafood," she says.

More on this topic: Bringing buyers and sellers of surplus food together