hello
Could this pair of shorts be man's best friend?

Could this pair of shorts be man's best friend?

BY AMANDA CHAI, FIRST PUBLISHED IN THE STRAITS TIMES, 6 OCT 2019 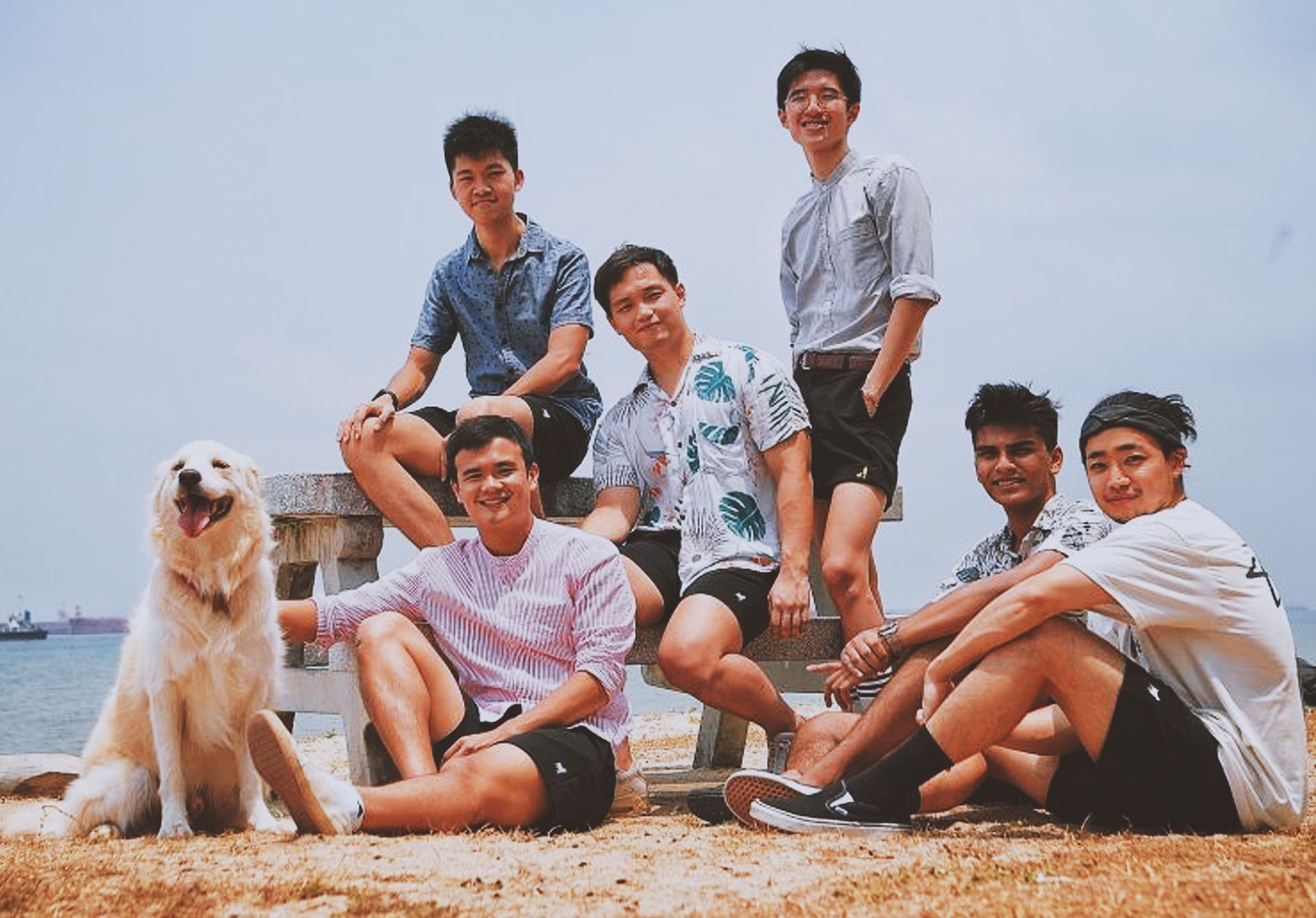 Inspired by a golden retriever's double coat, this pair of shorts from the label Man's Best Friend is said to be sweat-proof, stain-proof and waterproof

What makes the perfect pair of shorts? One that is sweat-proof, stain-proof and waterproof - and white to boot?

It might seem too good to be true, but a group of entrepreneurial young men has engineered one boasting all these claims.

The pair in question was created by six undergraduates who met in their first year at Yale-NUS College.

Sharing a common gripe about the lack of good men's bottoms in the market, the group - a mix of Singaporeans, Koreans and Thais - came together to make a comfortable pair of shorts that was also high-performing.

It took a day out at the beach and a sweaty dog for them to gain inspiration.

On a visit in January last year, he noticed that Andy's coat repelled dirt and dried from seawater quickly. Intrigued, he did more research on it.

"I realised that golden retrievers have a double coat - it helps to insulate them so they're comfortable in both cold and hot climates; and it repels dirt as well," says the Singaporean, who dropped out of Yale-NUS College to study law at Oxford University last month.

"So I thought there must be some sort of solution in nature that we can bring into fashion, in terms of fabrics."

With that, the group came to name its brand Man's Best Friend (MBF).

In March that year, the members started testing prototypes. Their biggest challenge was finding the right blend of materials that would work together and "replicate the synergy" of a dog's double coats.

It took three months to settle on one. The first coat, called a warp, uses tencel - a naturally derived alternative to cotton with proven antibacterial properties - to make it comfortable and odour-resistant.

The second, outer coat called a weft is made from polyester and spandex to keep it waterproof and wrinkle-proof.

But what sets the shorts apart from regular waterproof clothing is the added nanotechnology, says the group. The tech has to do with adding specific particles on fibres at a microscopic level, which enhance the fibres' ability to repel water.

"Anything that is hydrogen-based in liquid form, like H2O (water), will roll off. That was the finishing touch," says Mr U. They have a patent pending for this tech named DualCoat technology.

The shorts are made to be versatile - good for adventure sports, gym workouts and going on holiday.

More importantly, they will help reduce the wearer's carbon footprint. Because the enhanced tencel does not absorb moisture, bacteria cannot grow inside the fabric, allowing for more days' wear before washing.

Mr U sets the wear time at anywhere from three to seven days depending on personal hygiene.

With fewer washes, the shorts will use less water in the long run. The fabrics are also biodegradable.

President of Yale-NUS College Tan Tai Yong praises the group's innovation for addressing a perceived gap in the market, while committing to environmental sustainability.

"I have been making introductions to interested parties and hope that this project will receive wide attention," he adds.

Ultimately, the group hopes to challenge waste and seasonality in fast fashion, which has encouraged a habit of discarding past-season clothes deemed obsolete, says Mr U.

The shorts are available for pre-order at US$45 (S$62) in black and white options at www.mbf.sg, with more colours and an official Kickstarter campaign in the pipeline.

The group has already received 96 pre-orders from customers in Singapore, Thailand, South Korea and the United States.

Customers can expect to receive their orders within one to two months after the Kickstarter campaign ends and production begins.

Mr U adds: "Right now, there's no incentive for all these fashion companies to innovate and create new materials because what they're doing is already working. We're selling advanced apparel that is also sustainable.

"A lot of young people nowadays claim to be environmentally conscious, so I think we're filling that gap in the market."

Life in waterproof shorts, it's fantastic

Amanda Chai pairs the shorts with other clothing and takes them for a week-long test drive.

To my editor's dismay, there is only a black, size M prototype instead of the promised white pair.

A nanotech factory in China treats the fabric and sends it to be made into shorts in Thailand - and it is too costly to produce just one for the sake of this story.

This precious prototype is two sizes too large, so I belt it, the elastic waistband bunching up awkwardly in front. On my 1.56m frame, the shorts come up to a respectable length I can just about get away with in a semi-corporate setting. If anyone asks, I'll make up something about being the style writer.

On my commute, I wonder if anyone will notice I'm wearing men's shorts with a very strategic zipper in the front. But for science and journalism, I will persevere.

The day goes by without mishap, though I start to notice that the shorts aren't as wrinkle-resistant as they claim to be. I suppose they were not made for sitting in an office chair for hours.

There is no obvious odour or wear, though that isn't surprising - I have reworn bottoms multiple times before washing when on holiday.

Creator Man's Best Friend (MBF) recommends dipping the shorts under running water and hanging them out to quick-dry should you need a refresh. The shorts feel crisp when I pull them on and yesterday's crease lines seem to have smoothed themselves out after the shorts were hung to air in the night.

At the bus stop, someone gives my shorts a pointed stare so I return the favour.

I notice that belting them causes the material to bunch up around my inner thighs, but the mild sweat situation dries quickly when walking.

I manage not to spill any food on myself at a lunchtime beauty event. By the end of the day, the creases are back in full force.

It's a drizzly Wednesday, and given how unnaturally careful I have been with my shorts, I am tempted to walk in the rain just to test its waterproof claims.

But my complacency gets the better of me and I end up spilling coffee all over my lap at lunch - iced, thankfully. I watch, a little mesmerised, as the caramel beads roll right off the polyester and onto the ground. I almost forget to wipe down my coffee-stained legs.

Two male colleagues have commented that there's nothing really new about wearing the same article of clothing five days in a row, which makes me wonder just how unhygienic men truly are.

By Day 4, the shorts and I have become one entity. They are not the most comfortable, but miraculously still bear no trace of odour.

When I take a whiff, my nose fills with a synthetic, clinical scent - something I can only describe as coming close to a "new car smell".

At work, I drink bubble tea and stab the cup recklessly because in these shorts, I am that person now.

When a faulty water bottle explodes on me, I barely blink. The liquid rolls off so fast, there's no time for it to be absorbed into the material and reach skin. I can't speak for the stain-proof quality since the shorts are black, but they seem to be waterproof.

Where I do sweat is at my waist and thighs - the fabric is thicker than most of my work pants. It feels uncomfortable not because of that, but because it's tiresome to feel the same material on your skin every day. A girl needs her variety.

The weather has decided to make my last day of shorts-testing a blazing 31 deg C that "feels like" 36 deg C.

I'm off to test the shorts in a pool.

Fully submerged in water, they cling to your legs like regular shorts - save for the seat of the pants, which stays the most dry. I deduce that it is the pockets, made of cotton for now (the final product will be lined with tencel), that absorb the most water and cause it to feel wet.

Once out of the pool, the outer parts take around 20 minutes to dry, though the seat is never uncomfortably wet or plastered to your body. Since people do not usually wear shorts to substitute swimming trunks, these make a handy pair to pull on when you're out of the water and need something modest to dry off in.

Verdict: These are durable shorts great to take along on holiday when you are travelling light. Now, if only they came in a women's cut.