Singapore, 14 Feb 2021 - The digital Year of the Ox is underway as DBS customers usher in Chinese New Year (CNY) with the bank’s digital gifting options such as DBS eGift (“eAngbaos”) and DBS QR Gift (“QR Angbaos”), and interactive mobile games.

In just the first two days of CNY, usage of DBS’ digital gifting options hit new highs. As of 13 February (CNY day two), 32,000 DBS QR Gift cards totalling close to SGD 2 million in value were loaded. This is a significant jump from last year, when 18,000 DBS QR Gift cards were used with around SGD 660,000 loaded in the same period – equivalent to a 76% rise in number of DBS QR Gift cards used and a tripling in loaded value year-on-year (YoY). More were also using DBS eGift, Singapore’s first eAngbao that was launched in 2015. Over 9,000 DBS eGift transactions were made over the first two days of CNY, a 108% jump from the same period in 2020. In terms of total amount transacted, DBS eGift also experienced a surge from SGD 189,000 last year to SGD 595,000 this year.

Signs of this growing shift towards digital gifting options were already apparent since early February, with some Singaporeans choosing to start their CNY preparations early. Between 1 to 13 February (inclusive), around 102,000 DBS QR Gift cards were loaded with total value exceeding SGD 5 million, and close to 13,000 DBS eGifts totalling SGD 898,000 were sent.

Beyond digital gifting, the bank also leveraged its technology and gamification capabilities to avail engaging digital experiences such as TapLah! and POSB #HuntYourZodiac, as alternative ways for families and friends to still enjoy and have fun despite CNY restrictions. TapLah!, a mobile game hosted on DBS PayLah! where customers play for chances to win cash prizes, has seen positive user engagement with over 7,200 players since it went live on 12 February. POSB #HuntYourZodiac, an interactive virtual mobile game that integrates location-based technology and is playable island-wide for the first time this year, was met with strong reception – in the four days since it’s been rolled out, more than 45,000 people are already playing the game. This is a whopping 630% surge from last year’s pilot edition, which registered around 6,100 players.

The big shift to digital gifting options comes at a time when customers are increasingly moving to digital channels for their everyday banking and financial needs, a trend further accelerated by the Covid-19 pandemic.

Jeremy Soo, Managing Director and Head of Consumer Banking Group (Singapore), DBS Bank said, “As the leading digital bank in Singapore, DBS has been at the forefront of tapping on our talent and technology to make banking simpler, engaging and more seamless for our customers. By harnessing our digital capabilities, customers are still able to celebrate CNY joyfully and safely while retaining the meaningful tradition of gifting and sharing blessings for the new year with our QR Ang Baos; we also brought back the popular #HuntYourZodiac virtual game for added festive cheer and made it even better than last year’s edition. We may not be able to celebrate in-person this year, but that shouldn’t compromise the joy and festive spirit of CNY. With our range of digital gifting and experiential initiatives, we hope our customers will still enjoy a happy, blessed CNY.”

Launched in 2019 as a ‘phygital’ gifting option that marries tradition and technology, DBS QR Gift retains the meaningful and time-honoured tradition of exchanging physical red packets, whilst offering greater convenience and time-savings for customers. To ensure customers could easily access and obtain DBS QR Gift cards this CNY, the bank rolled out a free click-and-deliver service in January so customers could receive the cards from the safety and comfort of their homes. DBS QR Gift cards were also availed at DBS/POSB branches and new notes ATMs island-wide, as well as all Sheng Siong outlets and Esso service stations.

The shift towards digital gifting isn’t limited to customers – more corporates have come onboard as well! To date, 37 corporates (totalling close to 26,000 DBS QR Gift cards) have chosen to use DBS QR Gift cards to fulfil their employee gifting needs this festive season, in replacement of the traditional red packets and new notes. This is a significant seven-fold jump as compared to last CNY, when this initiative was first launched.

Said a spokesperson from Carousell, which is amongst the list of new corporate partners that adopted the initiative this CNY: “This year, we were looking for fun and creative ways to celebrate the festivities with our team, while keeping everyone safe. DBS QR Gift was a great way for us to complement our virtual celebrations and spread joy to our teammates without having to gather physically. The ability to customise the digital red packet with our branding gave it that extra personal touch too.”

Customers are encouraged to play their part for the environment by recycling their used red packets, DBS QR Gift cards, and even Mandarin orange carriers by dropping them off at the bank’s dedicated red packet recycling bins, located at all DBS/POSB full-service branches all-year round. DBS launched its dedicated red packet recycling initiative in 2019 in partnership with Tay Paper Recycling, and was the first bank in Singapore to do so. Since then, some 12,500 kg worth of recyclables have been saved – equivalent to 210 trees.

About DBS
DBS is a leading financial services group in Asia with a presence in 18 markets. Headquartered and listed in Singapore, DBS is in the three key Asian axes of growth: Greater China, Southeast Asia and South Asia. The bank's “AA-" and "Aa1" credit ratings are among the highest in the world. 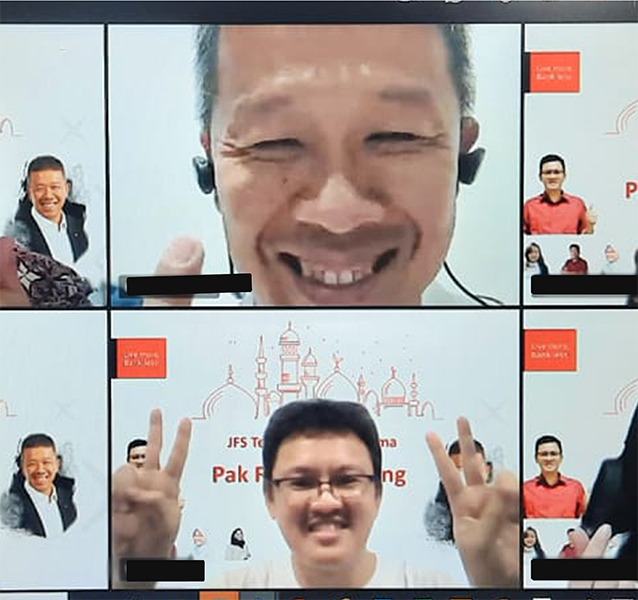 Forging (virtual) bonds with my team

“I joined DBS in the middle of the pandemic 11 months ago, was onboarded virtually, and have ...