Net interest income rose 2% on a day-adjusted basis from the previous quarter to SGD 2.11 billion. Net interest margin was unchanged at 1.49%. Loans grew 3% or SGD 12 billion in constant-currency terms to SGD 386 billion. Non-trade corporate loans rose 2%, similar to the 2020 quarterly run-rate, from broad-based growth across the region and a range of industries. Trade loans grew 6% from stronger market demand and higher commodity prices. Housing loans increased 1% following strong bookings in the current and recent quarters. Wealth management loans also grew from healthy investor risk appetite. Compared to a year ago, net interest income fell 15% as a 37 basis point decline in net interest margin due to global interest rate cuts was moderated by loan growth of 7%.

Deposits increased 2% or SGD 10 billion in constant-currency terms from the previous quarter to SGD 478 billion. As with recent quarters, current and savings accounts accounted for the increase, rising 4% or SGD 14 billion during the quarter and enabling higher-cost fixed deposits to be let go. Casa accounted for 74% of total deposits, an increase of one percentage point from the previous quarter and 16 percentage points from a year ago. Liquidity was ample with the liquidity coverage ratio at 136% and net stable funding ratio at 127%.

Net fee income increased 28% from the previous quarter and 15% from a year ago to a new high of SGD 953 million. Compared to a year ago, wealth management fees rose 24% to a record SGD 519 million as strong investor sentiment drove demand across a wide range of investment products in a low interest rate environment. Bancassurance fees were also higher, reversing declines throughout 2020. Transaction service fees increased 10% to a new high of SGD 230 million as trade finance and cash management fees grew. Investment banking fees increased 36% to SGD 49 million from higher fixed income and equity capital market activity. Card fees were only 2% lower at SGD 169 million as consumer spending recovered towards pre-pandemic levels and digital transactions accelerated. Loan-related fees fell 6% to SGD 119 million.

Other non-interest income of SGD 794 million was twice the previous quarter due partly to seasonal factors. Compared to a year ago, it was 12% higher. Trading income doubled from both comparative periods as Treasury Markets non-interest income and treasury customer income rose to new highs. Investment gains also increased from the previous quarter but fell from a high base a year ago.

Total income rose 18% from the previous quarter to SGD 3.85 billion from higher non-interest income. Total income was 4% below a year ago as strong business volume growth was more than offset by the impact of lower interest rates. If net interest margin had been stable, total income would have risen 9% from a year ago.

Expenses were stable from the previous quarter at SGD 1.59 billion. Compared to a year ago, they were 2% higher due to Lakshmi Villas Bank (LVB). Excluding LVB, higher bonus accruals in line with the better financial performance were offset by lower non-staff expenses. The cost-income ratio was 41%.

Asset quality was healthy. Delinquencies for both corporate and consumer segments continued to be low despite the tapering of loan moratoriums. New non-performing asset formation was half the quarterly average in 2020. Non-performing assets declined 2% from the previous quarter to SGD 6.59 billion and the NPL rate fell to 1.5%. Specific allowances of SGD 200 million or 21 basis points of loans were below the 31 basis points for full-year 2020.

The Common Equity Tier-1 ratio rose 0.4 percentage points from the previous quarter to 14.3%. Profit accretion and a methodology refinement for market RWA were partially offset by an increase in credit RWA. The ratio was above the group’s target operating range. The leverage ratio of 6.7% was more than twice the regulatory minimum of 3%.

In line with MAS’ guidance for local banks to moderate their dividends, the Board declared a dividend of SGD 18 cents per share for the first quarter, for which the scrip dividend scheme will apply. Scrip dividends will be issued at the average of the closing share prices on 10 and 11 May 2021.

DBS CEO Piyush Gupta said, “This has been an extraordinary quarter for our business as we fired on all cylinders. Loan and deposit growth were robust, fees were strong and treasury had a record performance. At the same time, we remained disciplined on costs while asset quality was resilient. The global economic rebound is strengthening and we are bullish about prospects for the coming year. Our franchise has been enhanced by new growth platforms, including stakes in Shenzhen Rural Commercial Bank and in Partior for blockchain cross-border clearing and settlement. We are in a position of strength to support customers and deliver shareholder returns as the economic recovery takes hold.” 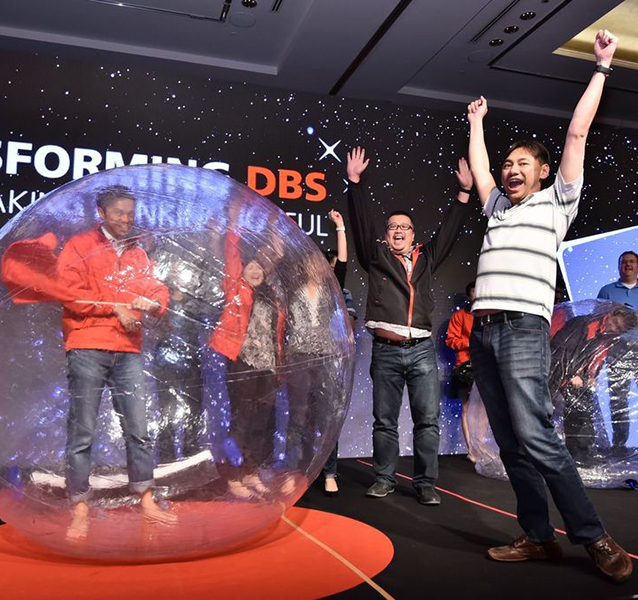 For a short period of his career at DBS, Alfian Sharifuddin had a secret ...