Singapore, 25 Apr 2017 - DBS Marina Regatta 2017 (DBSMR 2017), Singapore’s Biggest BayFest, returns with high-octane thrills and spills on land and water. From 1 to 4 June 2017, DBS Marina Regatta 2017 will be packed with a slate of unmissable activities to take outdoor enthusiasts, fitness lovers and partygoers alike from day to night, while watching the region’s top dragon boating teams battle it out against the iconic Marina Bay skyline for Asia’s highest prize purse of SGD 134,000. True to form, the regatta continues to introduce unique new experiences with the debut of Singapore’s largest giant inflatable water obstacle course and Singapore’s largest interactive art dome. 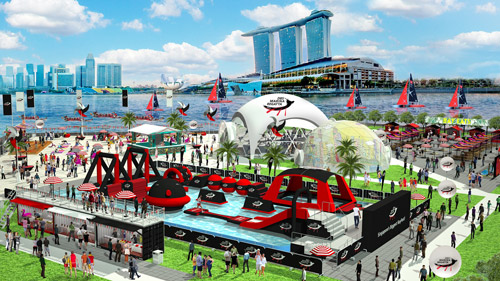 Sim S. Lim, DBS Singapore Country Head, said, “When we made our commitment to enlivening the Bay in 2013, we set out to bring community programmes to the public that would encourage them to see and experience all the Bay has to offer. This includes the DBS Marina Regatta, which has evolved into the Bay’s premier event, attracting tens of thousands of eventgoers each year. In Prime Minister Lee Hsien Loong’s 2010 Marina Bay City Gallery opening speech, he hoped that the Bay would come to define Singapore, in the same way that the Bund defines the city of Shanghai. Today, the Bay is renowned across the world, filled with dynamism and vibrancy – and we are glad to have contributed some part in making the vision of the Bay for people to live, work and play a reality.”

Said Karen Ngui, Group Head of Group Strategic Marketing & Communications, “It’s been quite a journey, evolving the DBS Marina Regatta from its modest beginnings in 2012 to Singapore’s Biggest Watersports Fest and now Singapore’s Biggest BayFest. From water to land, we have a packed slate of unmissable events for sports, fitness, wellness, and music lovers alike – it’s the event of the year for anyone who loves high-energy and high-octane thrills from day to night.”

As part of DBS’ continued efforts to champion the development of the social entrepreneurship sector to build a socially-conscious society, social enterprises such MINDS, Society Staples and Bettr Barista will provide many of the services in the regatta such as drinking water, catering and event organisation. They will also feature as vendors in the regatta’s art market and food village.

1) DRAGON BOATING – Region’s top teams compete for Asia’s highest prize purse
Organised in partnership with the Singapore Dragon Boat Association (SDBA), this year’s international dragon boat competition will see an estimated 90 teams and more than 3,000 athletes gathering on the waters of Marina Bay to compete for cash prizes totalling SGD 134,000 – the highest for the sport in Asia.

Dr Chia Shi-Lu, President of the SDBA said, “It’s been immensely gratifying to see how much the dragon boating community has grown both in Singapore and the region over the years with DBS’ instrumental support. The growth of the regatta and its supporters bear testament to the great strides DBS has made in elevating the sport locally and across the region.”

2) SAILING – Explore the Bay’s waters on DBS’ 18-metre-tall mega sailboats
Eventgoers will also get to try out sailing in the Bay during the regatta with DBS’ 18-metre tall Swedish Match 40 sailboats – the first of its kind in Asia. The sailboats were debuted in 2015 as part of the DBS Marina Bay Sailing Programme, which has been offering the public complimentary sailing sessions in the Bay since 2013. 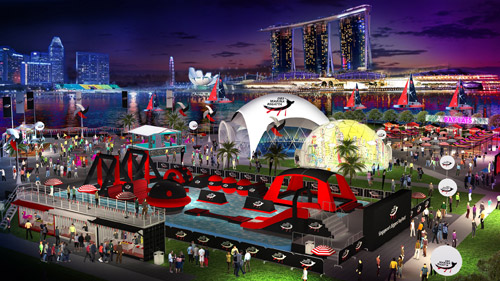 2) BAY BEACH – Singapore’s only pop-up urban beach returns bigger & better
This year, the Bay will once again be transformed into Singapore’s one and only pop-up urban beach, which will double in size from last year. Bali beach club Potato Head will be bringing in their legendary Coconut Bar here for the first time, complete with their signature uber fresh coconut cocktails and beers.

3) BAY DOME – Singapore’s largest interactive art dome
This year will see the installation of two majestic nine- and 7.5-metre tall domes at the regatta. Reaching a height of 7.5 metres, the Bay Dome will offer an immersive interactive art experience – Singapore’s largest – with an illustrated projection of the Marina Bay skyline. Eventgoers can customise their own characters and have their designs come to life on the projection to create an ever-evolving digital canvas.

4) BAY EATS – Offerings from Singapore’s top young chefs
For foodies, the regatta’s food village Bay Eats, will be curated by The Local People and feature food stalls from award-winning and the top new eateries in town such as the “Neo-Sin” restaurant Labyrinth, French eatery Garçons, The BellJar, Leng Leng ice cream and more.

5) PLAY DOME – Play in the day, party at night
The nine-metre-tall Play Dome will host many of the fitness classes launched by lululemon during the day. At night, the DBSMR X Ultra Countdown Party will take place exclusively at the regatta from 7pm to 10pm, on Friday and Saturday evening (2 & 3 June). The pre-parties will feature three Ultra Music Festival deejays every night, such as Dubvision, Crossnaders, Raiden, Jade Rasif, Moe and Myrne.

Since 2012, as part of the bank’s continuing efforts to bring the Bay to the people, and the people to the Bay, DBS/POSB initiatives such as the DBS Marina Regatta, DBS Marina Bay Sailing Programme, POSB PAssion Run for Kids, and its other complimentary cycling and yoga activities have attracted more than 80,000 to the Bay – transforming Marina Bay into a bustling hub of activity.

[End]
About DBS
DBS - Living, Breathing Asia
DBS is a leading financial services group in Asia, with over 280 branches across 18 markets. Headquartered and listed in Singapore, DBS has a growing presence in the three key Asian axes of growth: Greater China, Southeast Asia and South Asia. The bank's "AA-" and "Aa1" credit ratings, is among the highest in the world.

DBS is at the forefront of leveraging digital technology to shape the future of banking, and has been named “World’s Best Digital Bank” by Euromoney. The bank has also been recognised for its leadership in the region, having been named “Asia’s Best Bank” by several publications including The Banker, Global Finance, IFR Asia and Euromoney since 2012. In addition, the bank has been named “Safest Bank in Asia” by Global Finance for eight consecutive years from 2009 to 2016.