DBS on drive to Recycle more, Waste less with employees and public

Launches DBS Sparks Studio, a new in-house content studio that doubles up as an interactive space for communities, including social enterprises

Singapore, 30 Jan 2019 - Within the cafeteria of DBS’ Exchange Hub in Singapore, straws can no longer be found. For Chinese New Year this year, the bank handed out red packets as usual but without any plastic wraps. Clients visiting DBS Treasures lounges here drink from glasses and recyclable paper cups, without a plastic bottle in sight. These are but a few examples of the steps DBS has taken in its drive to “Recycle more, Waste less”. 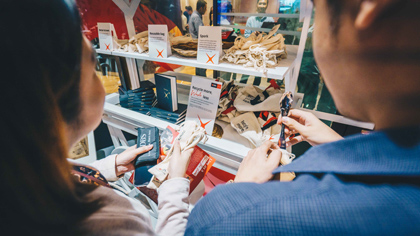 Last year, in conjunction with the introduction of DBS’ “Live more, Bank less” ethos, the bank upped the ante on its commitment to becoming more socially conscious and launched the “Recycle more, Waste less” eco-movement, with a focus on encouraging Singaporeans to reduce their consumption of single-use plastics – a particularly pressing issue in Singapore. According to the Singapore Environment Council (SEC), Singaporeans use at least 1.76 billion plastic items a year, of which less than 20% is recycled. Singapore shoppers also take 820 million plastic bags from supermarkets every year.

DBS’ call to “Recycle more, Waste less” has since resulted in more than 50,000 people pledging to adopt simple and easy steps in their daily lives – such as saying no to straws or ditching plastic bags for reusable ones – that reduce their consumption of single-use plastics.

Said Karen Ngui, Head of Group Strategic Marketing and Communications at DBS Bank, “At DBS, we believe we have an important role in helping to build a more sustainable society for future generations. Our aim with ‘Recycle more, Waste less’ is to shift how we collectively view recycling and conservation and bring about positive changes in people’s attitudes and behaviours. Together, we can become a more socially conscious society through small, simple and easily achievable lifestyle changes. We believe these everyday actions can result in significant long-term benefits for our island state.”

In its support of Singapore’s green push, DBS has adopted the following eco-friendly practices:

1. Changing procurement practices: DBS has drastically reduced its use and purchase of disposable plastic water bottles in Singapore, resulting in some 7.3 tons of plastic waste being saved every year. The bank also works with its tech vendor to reuse and reduce packaging for its electronic items, saving an estimated ton of plastic waste per year. This year, the bank also eliminated the use of plastic wraps for its red packets, avoiding 220 kg in plastic wastage.

2. Making it easier for employees to adopt sustainable practices: The bank has distributed 4,000 reusable bags (which fold easily to become tiny, zipped pouches), 2,000 Sporks (a hybrid metal cutlery tool shaped like a spoon and a fork at either end) and 2,500 sets of metal straws to help employees lead more eco-friendly lives. More than 1,300 employees have also pledged to an ongoing campaign to reduce their carbon footprint in 2019. DBS also recently carried out a six-week campaign that saw some 200 staff volunteers (or “Eco-Heroes”) drive greater awareness on recycling among employees. The campaign has resulted in over three times more recyclables (close to 1,900 kg) being collected.

3. Helping Singaporeans to become more environmentally-conscious: The bank gave away 20,000 reusable water bottles last year to attendees of the DBS Marina Regatta and Social Enterprise Summit. 8,000 Sporks were also given out as part of a “pledge-for-Sporks” campaign across universities, food outlets and hawker centres in Singapore.

4. Working together with like-minded partners: In December 2018, DBS partnered the Singapore Environment Council (SEC) to jointly launch the ‘One Less Plastic’ national campaign with four leading supermarket chains – Dairy Farm Singapore Group, NTUC FairPrice, Prime Group and Sheng Siong – to encourage the use of reusable bags among supermarket shoppers. To date, some 30,000 reusable bags have been distributed through the partnership.

Today also sees the launch of the DBS Sparks Studio, located at the bank’s headquarters in the Marina Bay Financial Centre district. Designed flexibly as a “studio by day, communal hub by night”, DBS’ new in-house content studio will also serve as an interactive space for communities – which includes social enterprises supported by DBS Foundation, interest groups within the bank, as well as public interest groups – where they can gather, network, organise or attend events.

DBS’ green initiatives are part of the bank’s commitment to sustainable development. It was the first Singapore bank to be included as an index constituent of the FTSE4Good Global Index, a global sustainability index. The bank is also the first Asian bank and first Singapore company to join global renewable energy initiative RE100.

DBS has pledged to power 100% of its Singapore operations using renewable energy by 2030. As part of this commitment, the bank installed 1,200 solar panels at its office buildings in Changi Business Park. Today, 40% of DBS’ total energy consumption in Singapore comes from renewable sources. In 2017, DBS launched Singapore's first green bond by a financial institution and helped to promote green ﬁnance through the issuance of a USD 500 million green bond. In the same year, DBS was also the sole bookrunner for the first green bond by a Singapore company – City Developments’ SGD 100 million green bond.

To find out more about DBS’ “Recycle more, Waste less” eco-movement and the bank’s other sustainability initiatives, visit go.dbs.com/recyclemorewasteless.

[END]
About DBS
DBS is a leading financial services group in Asia, with over 280 branches across 18 markets. Headquartered and listed in Singapore, DBS has a growing presence in the three key Asian axes of growth: Greater China, Southeast Asia and South Asia. The bank's "AA-" and "Aa1" credit ratings are among the highest in the world.

With its extensive network of operations in Asia and emphasis on engaging and empowering its staff, DBS presents exciting career opportunities. The bank acknowledges the passion, commitment and can-do spirit in all of our 26,000 staff, representing over 40 nationalities. For more information, please visitwww.dbs.com.